Genetically Modified Food – Why Transgenic Seeds Should Concern All of Us

What is genetically modified food? And why should we be concerned about it? If you live in the USA, these scientifically altered crops are in the food you eat and you might not even know it. There are a number of things to consider when we discuss GMO pros and cons. Take a look. 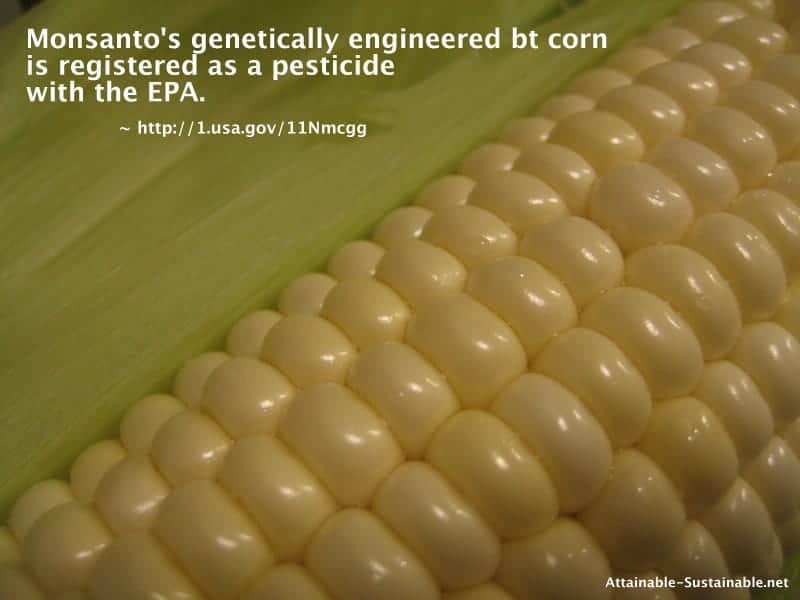 Blah, blah, blah, GMO. Blah, GMO, blah, blah, blah. A friend recently told me that “GMO” has become a buzzword to her. She tunes it out when she sees it come across her computer screen.

It was when she saw Robyn O’Brien’s TEDxAustin video that it kind of clicked for her. Banned in so many other countries? Potentially causing disease? Making us sick? Buzz word or not, it’s time we all started paying attention to genetically modified food, and compare the GMO pros and cons.

So what exactly is a GMO seed?

Genetically engineered seeds (also called ‘GMO’ – genetically modified organisms – and ‘transgenic’) are often confused with hybrid seeds. In fact, some people claim that hybridization is just another form of genetic modification. Not exactly. In a nutshell, here’s the difference: 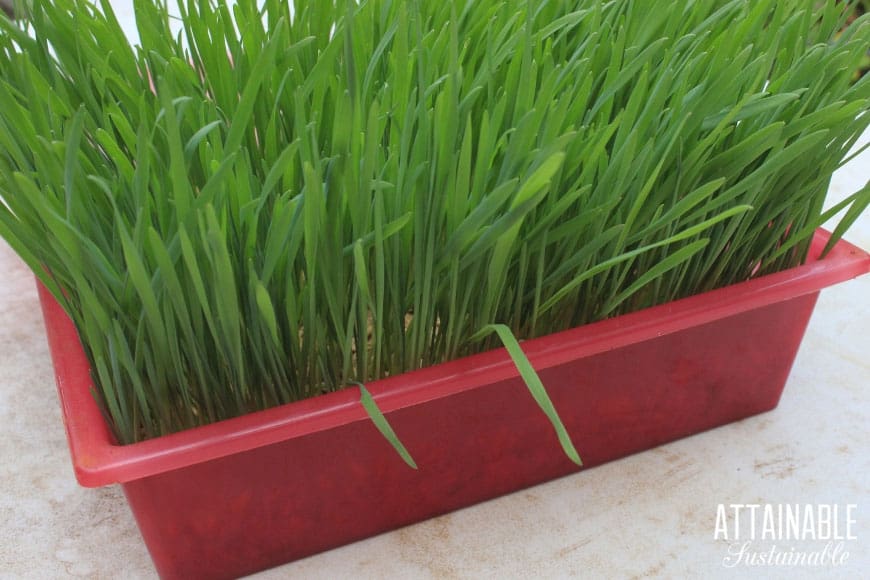 Monsanto’s Roundup Ready seeds allow farmers to spray crops like corn, sugar beets, soybeans, alfalfa, and cotton with (Monsanto owned) Roundup herbicide – a weed killer – without damaging the crop itself. Another genetic alteration inserts the Bacillus thuringiensis (Bt) toxin into seeds in an effort to deter pests from chewing on corn or cotton crops.

Poisons sprayed on and embedded in the food we eat. In the debate about GMO pros and cons, this definitely goes in the “cons” column for me. 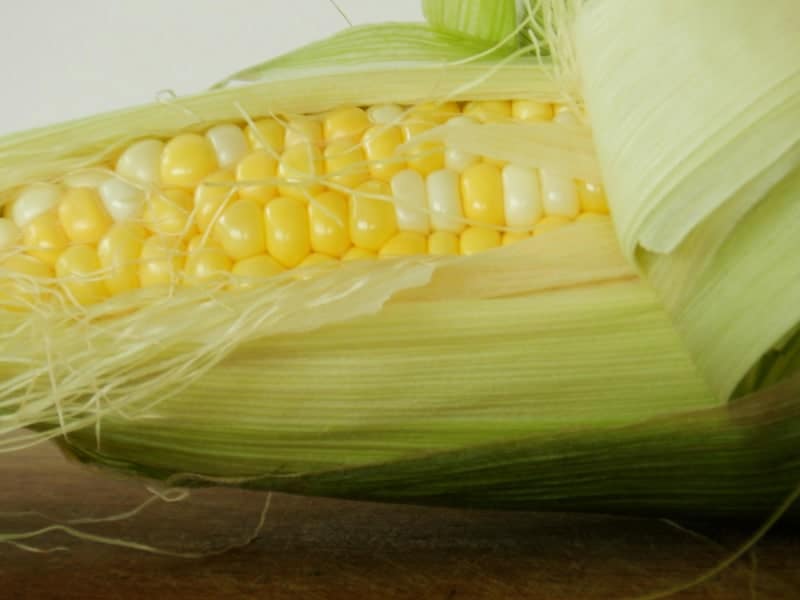 Problems in the field

Opponents of genetically modified crops worry about potential risks associated with this relatively new method of farming. We’re already seeing a backlash in the field with the advent of superweeds.

“It turns out the widespread use of Roundup has led to the evolution of far-tougher-to-eradicate strains of weeds.”

The Wall Street Journal reports that western corn rootworms are developing a resistance to crops genetically engineered with Bt to combat pests. And there’s another issue in the field: contamination.

Laboratory scientists figured out how to cross the natural barriers that Mother Nature has devised. Now the resulting fields continue to share all of their glorious pollen. Pollen from genetically modified crops is drifting onto traditionally grown crops, bringing those GMO traits with it. Baker Creek Heirloom Seeds prides itself on their non-GMO seed selection, but in a recent catalog the owners lamented that it’s getting more difficult to find corn seed that’s not contaminated with GMO traits.

Then there’s the story of Percy Schmeiser, a Canadian farmer whose fields were contaminated with Monsanto’s Roundup Ready canola. Monsanto sued Schmeiser for patent infringement. 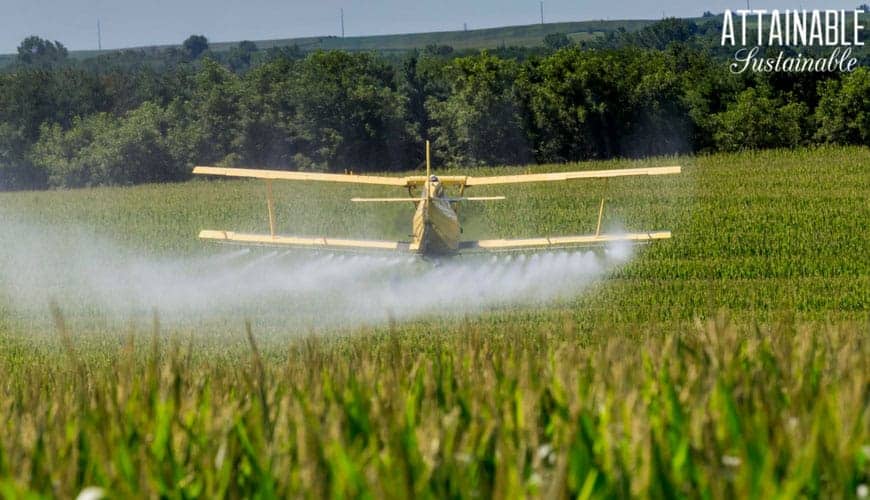 Why transgenic? What are the pros and cons?

Why are we still weighing the pros and cons of gmo crops? Because we can’t seem to come to a consensus.

While Bill Gates is using his money to promote transgenic crops as the only way to produce enough food to feed the world in the future, independent studies have proven otherwise. Rodale Institute’s Farming Systems Trial — ongoing for 30 years — has shown that organic growing methods are equal to or superior than conventional farming methods. Genetically modified crops have been incorporated into the study for only three years, but they note:

Rodale also points out that

For a system to be sustainable, it needs to be able to feed our global population not just now, or ten years from now, but one hundred years from now — and longer.

Sustainability is based on a simple principle: Everything that we need for our survival and well-being depends, either directly or indirectly, on our natural environment.  Sustainability creates and maintains the conditions under which humans and nature can exist in productive harmony, that permit fulfilling the social, economic and other requirements of present and future generations.

Sustainability is important to making sure that we have and will continue to have,  the water, materials, and resources to protect human health and our environment.

Companies like Monsanto, Syngenta, Bayer, and DuPont have convinced farmers that their seeds are superior, forcing themselves into the agricultural loop every spring. Farmers depending on those transgenic seeds cannot sustain their crops for more than one season without the injection of more seeds from Big Ag. 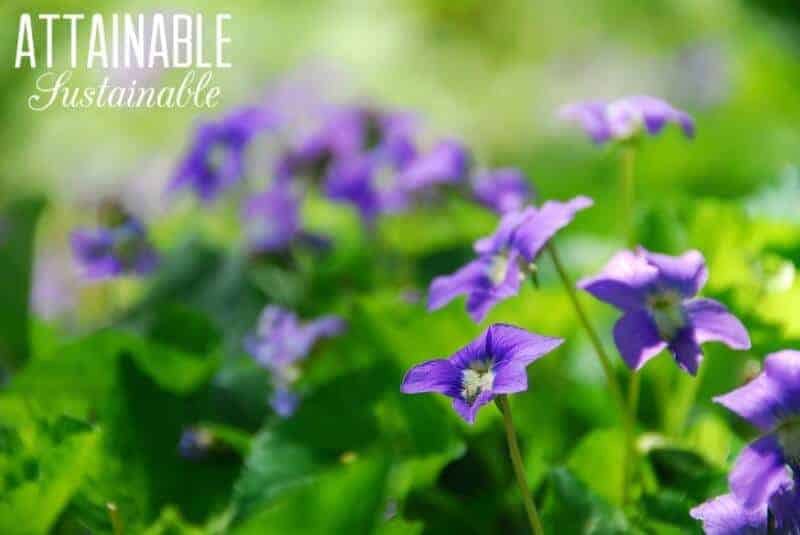 Health risks associated with genetically altered foods are a grayer area. It’s easy to identify superweeds or the failure of pest-resistant GM crops. Tracking the source of health issues in humans who eat a diet that’s contaminated with not only GMOs but chemical additives, trans-fats, and preservatives it much harder to determine the impact of GMO foods on our health.

There are some concerning studies that link genetically engineered foods to infertility, and another that points to sterility as well as the growth of unnatural hair inside the mouths of test hamsters. One Canadian study found Bt-toxin from Monsanto’s corn circulating in the blood of 93% of the women tested.

Even doctors are becoming concerned about genetically modified foods.

In 2009 the American Academy of Environmental Medicine (AAEM) called for a moratorium on genetically engineered foods based on their review of the research. According to Vitality magazine, patients who cut GMOs from their diet have found relief from irritable bowel syndrome, migraines, asthma, and colitis.

But for every study that calls the safety of genetically modified food into question, it seems there’s another that refutes it. The GMO pros and cons list is an embattled one. Proponents of genetically engineered foods claim that there’s no scientific evidence that these foods are detrimental to humans.

And they’re right — but are we getting the whole truth?

There have been reports of independent scientists being harassed when they try to delve into the safety of transgenic seeds and corporations like Monsanto and Syngenta restrict access to seeds for testing. Studies touting the safety of crops grown from genetically modified seeds can often be traced back to the seed companies themselves.

Unfortunately, it is impossible to verify that genetically modified crops perform as advertised. That is because agritech companies have given themselves veto power over the work of independent researchers.

Research on genetically modified seeds is still published, of course. But only studies that the seed companies have approved ever see the light of a peer-reviewed journal.

Vote with your pocketbook

Pros and cons of genetically modified food – the bottom line

The FDA classifies genetically modified food as “generally recognized as safe” and does not require that GMOs are labeled as such, in spite of the fact that countries all over the world require labeling or have gone so far as to ban growing or importing transgenic crops entirely.

In spite of the FDA’s assurances that GMO foods are safe, one million Americans asked for GM labeling during the Just Label It campaign in California. According to their site, studies show that more than 90% of Americans support mandatory labeling of genetically engineered food.

GMO labeling initiatives are in various stages in more than a dozen other states. The desire of Americans to be cautious about GMOs has so far fallen on deaf ears.

Prop 37  in California, the GMO labeling bill, failed to pass by a slim margin late last year, as chemical and food manufacturers spent millions of dollars to fight the labeling law.

Here’s Monsanto’s take on why the company contributed $4.2 million to fight labeling requirements for GMO foods.

Currently, the only way to be sure a product does not contain genetically modified ingredients is to purchase organic foods, though even those aren’t perfect.

Even so, there’s concern about cross contamination. Look for the Non-GMO Project logo on products. It indicates that products have been found to be free of GMO ingredients.