I love my cast iron. I have several pieces, from a variety of sources, but the big skillet comes out most frequently. It takes a little bit more care than some cookware does, but it’s more about awareness than actual work. The most important thing is keeping the iron protected from moisture so that it doesn’t rust. A well-seasoned piece of cast iron is a thing of beauty. (See more about seasoning cast iron here.) 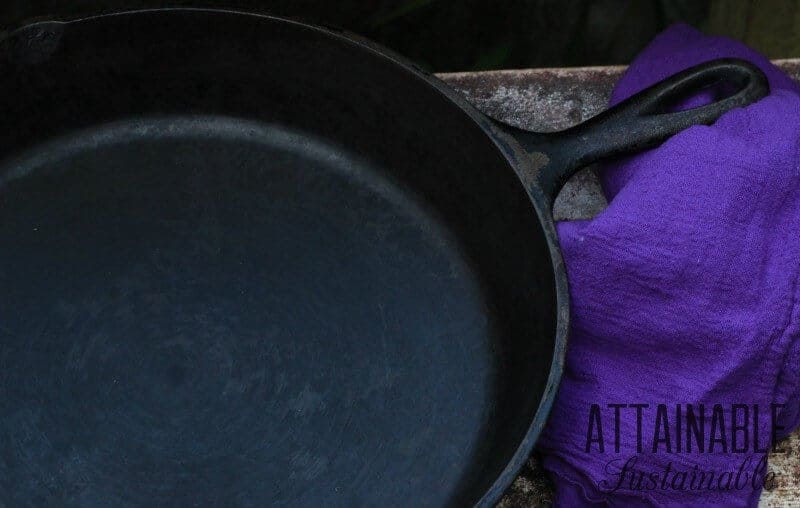 Recently, a number of people have expressed concern to me that American-made Lodge cast iron products are pre-seasoned with genetically modified oils. GMO cast iron?? Not one to just run with a rumor, I contacted Lodge directly to see what they had to say.

We season all of our traditional cast iron products with 100% soybean oil. Because approximately 90% of all soybeans grown in the US are GMO, our seasoning oil most likely contains oil derived from GM crops.  As non-GMO sources of oil become more readily available, we will investigate the possibility of using those for our seasoning oil. Currently, the soybean oil we receive to season our products is highly refined and contains no toxins whatsoever. Lodge has a long-standing commitment to being an environmentally responsible company.

I have to say, kudos to Lodge for being so forthcoming.

Now that you know, you can make some choices about how to source cast iron for your kitchen. Some people may decide that the minimal amount of soy oil on a pre-seasoned piece of Lodge cast iron isn’t enough to worry about. Others may be purists who feel that no amount of GMO soy oil on their cast iron will do. People who want to start a collection of cast iron without potential GMO contamination have a number of options.

Buy second-hand cast iron. Unless a piece has a serious flaw, most rusty and worn cast iron is salvageable. Seasoning cast iron is something you can do yourself, at home. You can cook off the surface crud by putting your pan in the oven and running the self-cleaning function. Alternatively, you can set it in a hot fire pit and let the coals do the work.

Choose new cast iron that has not been pre-seasoned. This allows you to season your own pans with your choice of oil. Unfortunately non-seasoned cast iron is pretty rare these days. [Here’s one.]

Remove the pre-seasoning from new pieces. The price on new cast iron cookware is incredibly reasonable and there are so many styles to choose from.  You might decide it’s worth it to strip and re-season. [My son took one like this to college with him.]

Choose enameled cast iron. While these Lodge products are not American-made, the enamel finish means that there’s no need to season the surface, thus eliminating the soybean oil step.