Home → Blog → Apocalyptic Fiction: The End of the World as We Know it

Apocalyptic Fiction: The End of the World as We Know it

It might seem a little odd that I’m fascinated with apocalyptic books, but I find the “what ifs” that are presented in these fictional stories to be compelling. Much like stories of pioneers making their way west or depression-era survival stories, I find the fictional situations in a post-modern world to be educational in a sense. 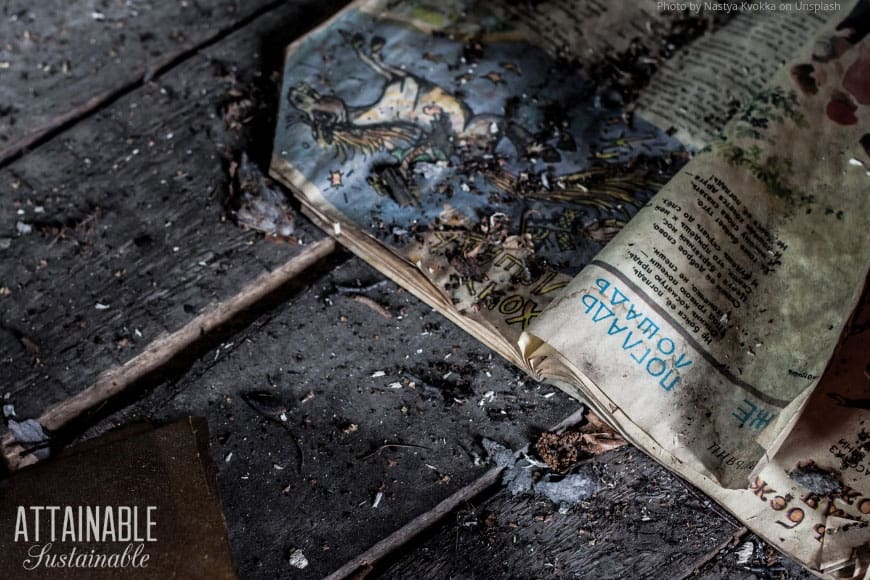 Apocalyptic novels worth your time

Instead of looking back to a time when nobody thought twice about cooking over a wood fire, these apocalyptic novels guess at what might happen when a world accustomed to electricity and internet suddenly finds itself in a permanent blackout. How different it would be!

I am by no means a doomsday prepper. While there’s always the risk of a disaster that could test our preparedness – the end of the world as we know it – I’m more concerned about filling our pantry with healthy food while it’s in season, providing for ourselves instead of depending upon others to do so, and living in a more environmentally sound manner. (Once upon a time it was considered common sense to maintain a pantry that would take a family through winter; now it’s considered “prepping!”)

This list of apocalyptic books and novels present imagined scenes from the end of the world as we know it. These are good stories. (There are a lot of really bad apocalyptic novels out there…) And they don’t feature zombies. I’m not into zombies.

Life As We Knew It by Susan Beth Pfeffer

Life As We Knew It by Susan Beth Pfeffer is an apocalyptic tale that’s got just the right amount of fearfulness for a young adult book, without getting too gruesome. In this modern day survivalist story we meet Miranda Evans and her family just as the world is anticipating a show in the night sky. An asteroid on a collision course with the moon has everyone all abuzz. Then the asteroid makes impact, sending the moon off its axis and much closer to the earth. Sensing imminent danger, Miranda’s mother makes common sense preparations to keep her family warm and fed. Their small Pennsylvania town soon faces power outages, food shortages, outbreaks of disease, and death. I was fascinated with the foresight shown by Miranda’s mom in this book. As the tragedy unfolds in this apocalyptic novel, she stocks up on food and batteries, thinks ahead to a cold winter without electricity, and insists that her boys chop copious amounts of firewood. I like to think that in a similar situation I’d be able to be so level headed. I have to admit, though, the idea of spending a winter snowed in and stuck in one room of the house with my entire family gives me pause. A companion book, The Dead and The Gone, gives readers an entirely different view of the same event. This story is set in New York City where Alex Morales struggles to keep his two sisters alive in the mysterious absence of his parents. As the city decays around them, Alex must barter for food and make tough decisions about what’s best for his sisters. The third book, This World We Live In, brings the Evans and Morales families together a year after the asteroid hit the moon. With food supplies dangerously dwindling and more mouths to feed, the families turn to scavenging what they can from abandoned homes. The three book series – known collectively as The Last Survivors – introduces some tough questions about surviving in a harsh environment without the comforts we’re used to. Without electricity, heat, and running water, the characters are forced to learn once-common skills.

The Things That Keep Us Here by Carla Buckley

Every season it seems there’s talk of a possible flu pandemic. In The Things That Keep Us Here author Carla Buckley introduces readers to one family who puts themselves under voluntary lockdown in order to avoid contamination. With a 50% survival rate, exposure to the virus is incredibly dangerous and something to be avoided at all costs. But circumstances don’t always make that possible. Food and water is scarce, heat is hard to come by, and power is out. The family is forced to make some tough decisions as neighbors die around them and as circumstances get more dire.

After years of doing so, I no longer link to Amazon. I’ve decided that I’d rather support small businesses when I can, and as such the links you see here will take you to IndieBound, an online portal that sources books from independent booksellers across the nation.

The Eleventh Plague by Jeff Hirsch

This book is set in a post-apocalyptic America in which 2/3 of the population has been decimated by war and pandemic. The Eleventh Plague by Jeff Hirsch is another novel for young adults. Roaming the barren landscape with his father and grandfather, Stephen is a salvager who roams the country in search of material to trade. It’s a life he has become accustomed to – one with bandits and slavers who would have no qualms about killing or enslaving the small family. While the idea of staying in one place and settling down to raise food crops is appealing, it’s not very feasible. That is, until they discover Settler’s Landing. There, Stephen gets a taste of living in a community that resembles life before the apocalypse. It was interesting to see what resources the community had on hand and depended on, from medical supplies to the simplicity of a collection of books.

The Road by Cormac McCarthy

Cormac McCarthy’s apocalyptic book, The Road, won the 2007 Pulitzer Prize for fiction and deservedly so. This is a beautifully written, tragic book. My teenage son and I both read it and we discussed it for days. He’s added this to his list of “best books ever.” The world has been decimated by some unnamed catastrophe, leaving behind a landscape that is washed out and grey. A father and his young son travel by foot, always moving toward someplace better. As they travel, readers glimpse the end of the world as we know it and how difficult it is for the travelers – other survivors are threatening, there’s little in the way of food, and often no shelter. There were a couple of decisions made by the father that I still wonder about, but I won’t give the story away.

One Second After by William R. Forstchen

In One Second After author William R. Forstchen introduces readers to the very real concept of an electro magnetic pulse (EMP). An EMP is the by-product of a nuclear blast detonated above the Earth’s atmosphere. A blast like this would render all electronic equipment in a certain radius useless. The chaos that occurs when modern vehicles come to a halt on the freeway is just the beginning for retired army colonel John Matherson. While there’s plenty to worry about – phones are out, people are dying, and his small North Carolina town is isolated from any deliveries – his initial concern is for his type-one diabetic daughter who needs medication to survive. As the crisis continues, he takes on a leadership role, contending with scarce food supplies, societal breakdown, and roving gangs. This is probably the most gruesome of the books I’ve included here. There’s more violence in this one than I’m generally comfortable with, but it’s a compelling story. This book was cited on the floor of Congress as something that all Americans should read. An EMP is considered to be a very real possibility, not just the subject of this apocalyptic book.

Note that as much as I appreciated this apocalyptic novel, I was disappointed in the follow up, One Year After.

The Dog Stars by Peter Heller

In The Dog Stars we get a look at the world a decade after being decimated by a flu pandemic. With survivors few and far between, Hig has something many don’t: the ability to fly. His pilot skills allow him to protect his space near the airstrip from invaders. But is protecting himself and his two sidekicks enough? This one’s a bit ruthless and gruesome in parts but the thoughtfulness of Higs makes it about the human condition, too. What’s to live for if there’s no love?

This apocalyptic book gets rave reviews, even from people who don’t normally love this genre. In Station Eleven, readers follow a troupe of performers as they make their way around the Great Lakes area 20 years after the end of the world as we know it. This group of misfits, calling themselves the Traveling Symphony, risk life and limb to continue providing art in a broken world. As this story unfolds it moves back and forth in time, from pre-influenza to post-modern apocalypse.

Beef up my apocalyptic books collection

Are you a fan of apocalyptic novels or the end of the world as we know it scenarios? Will you recommend your favorites in the comment section below? I’m always looking for more titles to add to my stack of reading materials!