I’ve tried my fair share of natural weed killers. From organic weed control recipes to weed blockers, here’s what worked (and what’s been less than stellar) at keeping weeds at bay.

Be sure to try these natural pest control methods, too! 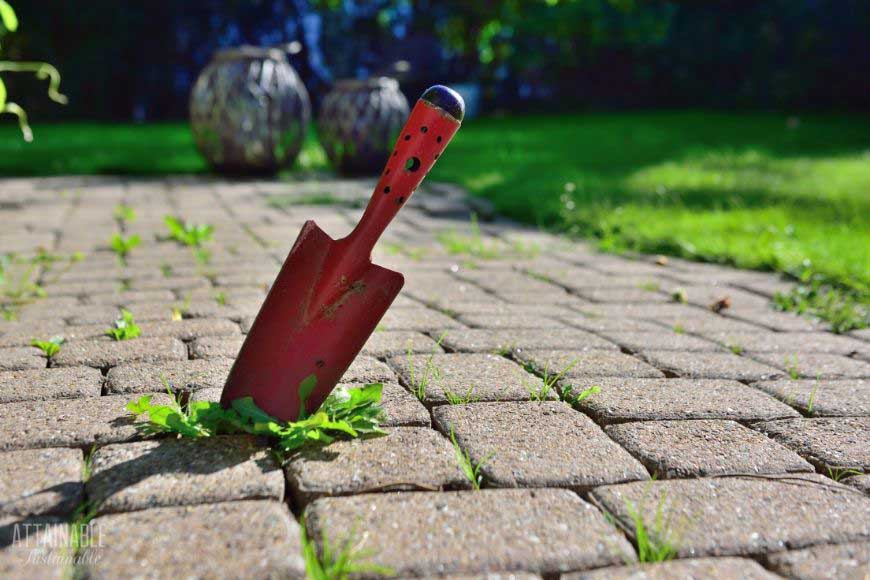 Here in the islands, some edibles grow like weeds. Avocados, liliko‘i, and papaya sprout in my compost heap all the time. Want to know what else grows like weeds? Weeds. And since I dislike spraying poison, I’ve done my fair share of experimenting with natural weed killers and other weed control methods. This is what our orchard space looked like when we moved in: 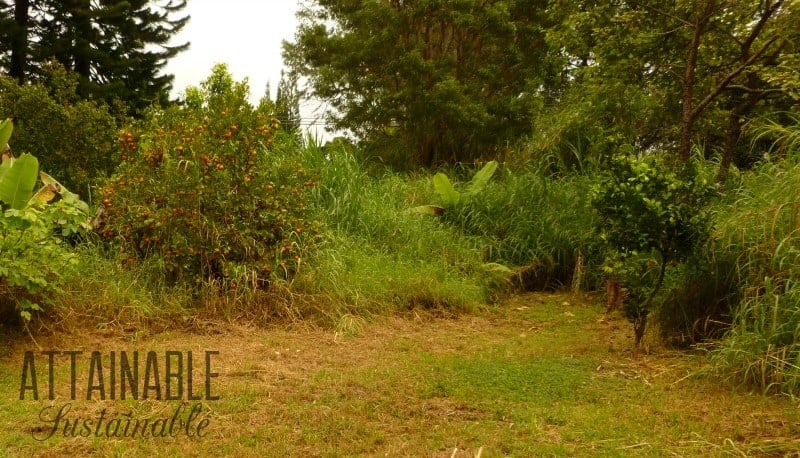 This is what the same area looks like today:

The photo angle is a bit different, but the tangerine tree in each photo (it’s at the center of the bottom image) will give you an idea just how much weed management we had to do when we moved in.

I’ll be honest. It would be soooo much easier to fill a sprayer with poison that would kill noxious weeds right down to the root. But it’s just not worth it to me to put my family’s health — and that of our planet — at risk. I’m pretty committed to organic gardening, both for my family’s health and that of the planet.

The organic weed control methods I use around here vary, depending upon the location and type of weed.

What is a weed?

As evidenced in the top image, when we moved into this place the entire yard was overrun with elephant grass. It’s horrid, horrid stuff. Elephant grass grows ten feet tall and the stems can be 1/2″ thick. When it can no longer hold itself upright, it falls over and easily roots into moist soil. It’s itchy and nasty and we didn’t want it here.

Initially, we had to remove it by hand, but once we’d reduced it to short clumps we discovered that after a couple months of mowing it low to the ground, the clump just died. Obviously, this only works in wide areas that allow access with a lawn mower. For areas the we can’t reach with a mower, we’re using a Japanese sickle to cut them down by hand. (It’s my new favorite hand tool.) 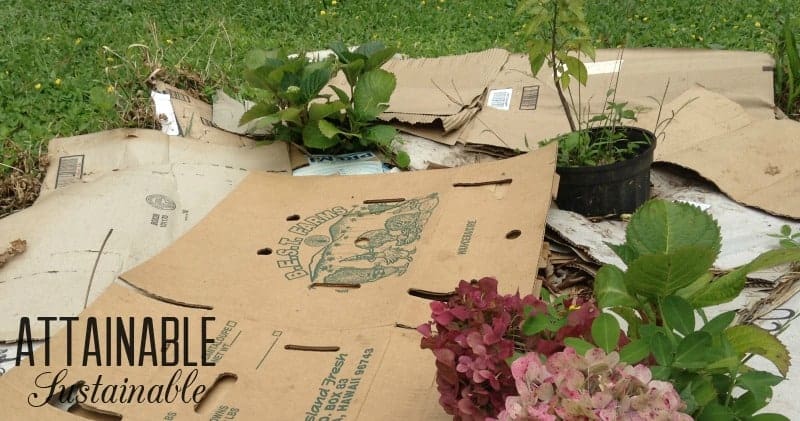 I use this method around trees, shrubs, and perennials to create a weed barrier; essentially, areas where I won’t be trying to dig.

Every cardboard box or newspaper that makes its way into my house goes into the yard and garden. As you can see above, I flatten the boxes, remove any plastic tape, and spread them around the base of trees and plants to smother weeds. This greatly reduces the weed population, but its ugly. I generally cover the cardboard with wood chips or mulch. [See below.]

As the cardboard and newspaper breaks down, the weeds will eventually start to come back. When I notice this, I just repeat the process. The benefit here is that the layers of mulch eventually break down and improve the soil. 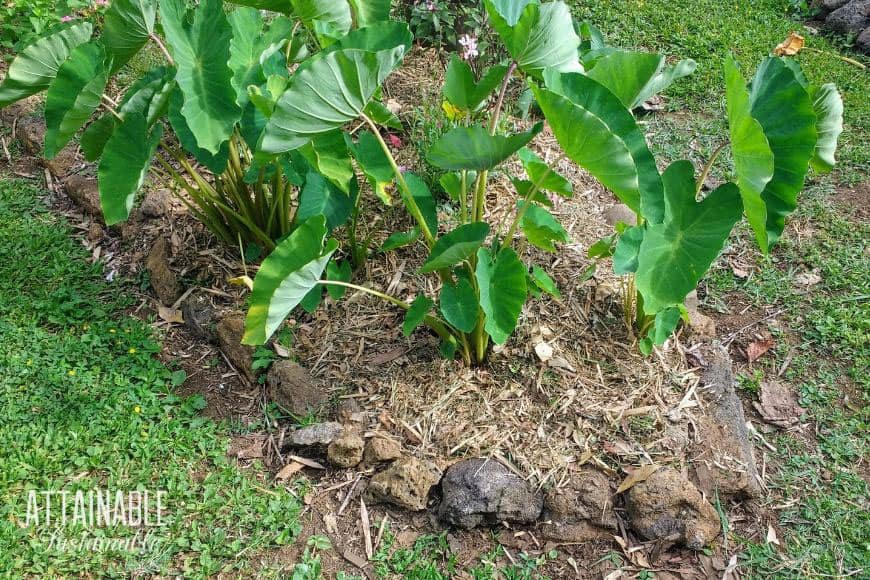 Fence lines and edges are the areas where a lot of people fall back on poisonous weedkillers. I’ve found that using a weed burner works beautifully to knock down weeds at the edge of my garden beds. For the most effective weed killing action, repeat the burning soon after you see weeds starting to sprout again.

I don’t recommend this method if you live in a dry region. At all. You do not want to be the person who started the forest fire.

Our place is pretty much green year round, though, so there’s not much risk of starting a fire if I’m cautious. 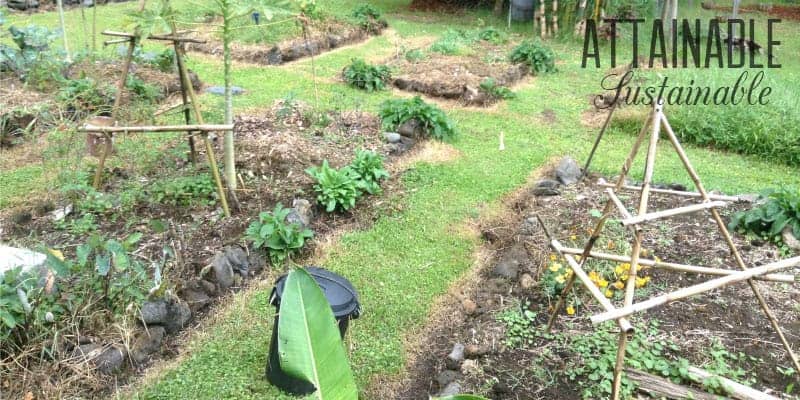 I’ve talked before about putting your flock to work. Chickens are natural weed killers. A moveable chicken tractor will allow you to shift them around your yard into weedy areas without putting your garden at risk.

Another trick? To get the hens to work specific areas — the fence line, say — and keep weeds down, I scatter scratch in those areas. 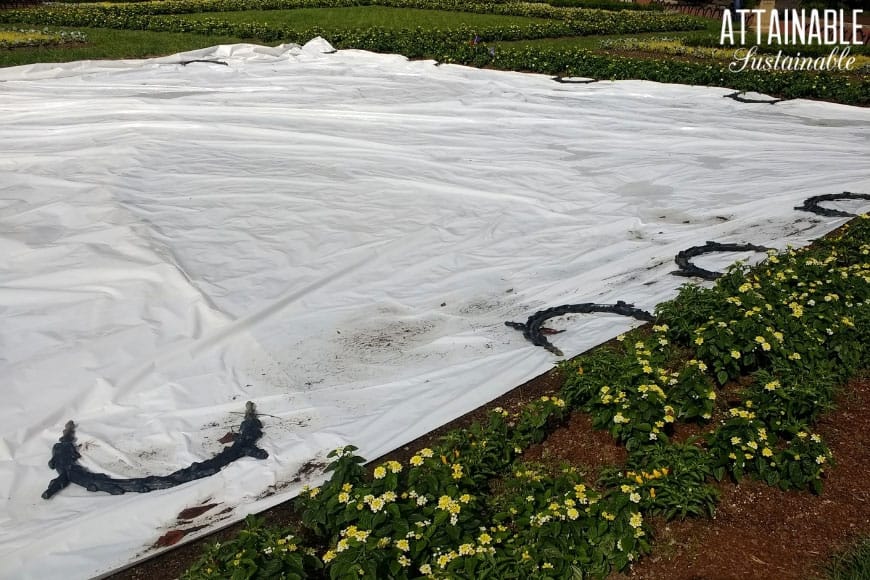 Solarizing as a natural weed killer

You can use the power of the sun as a natural weed killer. It’s not a quick fix, though. Spread a dark tarp on the area where you want to kill weeds. Set a few rocks on the tarp to hold it in place, then walk away. Depending on the sun, it can take two weeks to a month or more to kill the weeds under the tarp, but it’s definitely a low-effort organic weed control method. Go here for a more detailed look at this method from Tanya at Lovely Greens.

I have adopted Ruth Stout’s lazy method of gardening in my vegetable beds. I regularly top off my beds with a thick layer of grass clippings, adding more as young weeds emerge.

The exception here is one horrible, creeping grass that I don’t know by name. It does manage to wend its way through the thick mulch. The mulch makes it easier to pull, though, so it’s at least a small step in the right direction. Bonus: The mulch is great for building healthy soil.

This method works well, but it does require a lot of mulch. Beware of bringing hay into your garden beds; you might end up with more trouble than just weeds. I invested in a lawn mower bag to collect clippings rather than letting them drop. (Thanks for that suggestion, Angela!) We use those cuttings around the base of trees, but not in the veggie garden where they might root and become a problem. 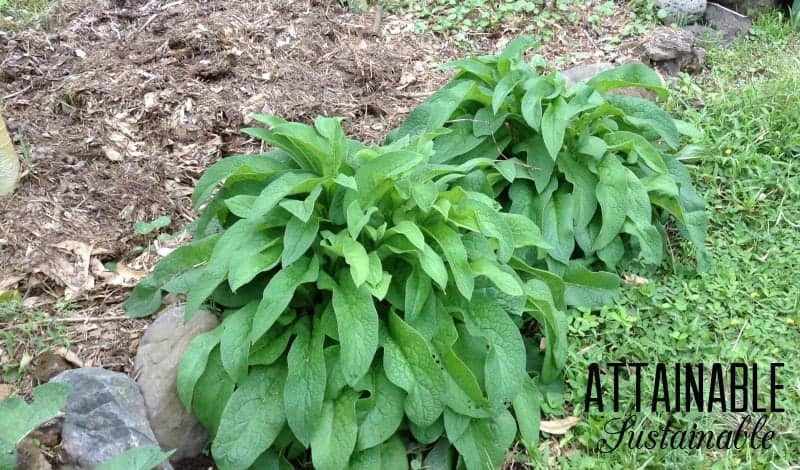 Many common weeds don’t like the shade. You can take advantage of this and plant accordingly. This is more of a natural weed suppression method than a natural weed killer, but I’ve found it to be quite effective.

Tighten up the spacing between your vegetable plants to shade and crowd out the weeds. I have comfrey planted at the edge of my garden beds and I allow plantain to take root there, too. These plants both grow wide and close to the ground. The shade they cast prevents weeds from taking root there. Buckwheat can be used to hold down weeds in a vegetable garden. It’s a short-lived annual and will die down and become mulch for your veggies.

Perennial peanut grass is a hardy ground cover for use in warm climates; it will out-compete many weeds. Just be mindful that it is deeply rooted and may creep into nearby cultivated areas.

This isn’t practical for a big project, but when I have water boiling in the kitchen — from cooking pasta or canning, say — I take it outside and pour it on weeds. I usually reserve this natural weed killer method for weeds in the driveway or growing in cracks in concrete. Don’t pour it near any plants that you want to keep. The hot water could damage their roots, too. 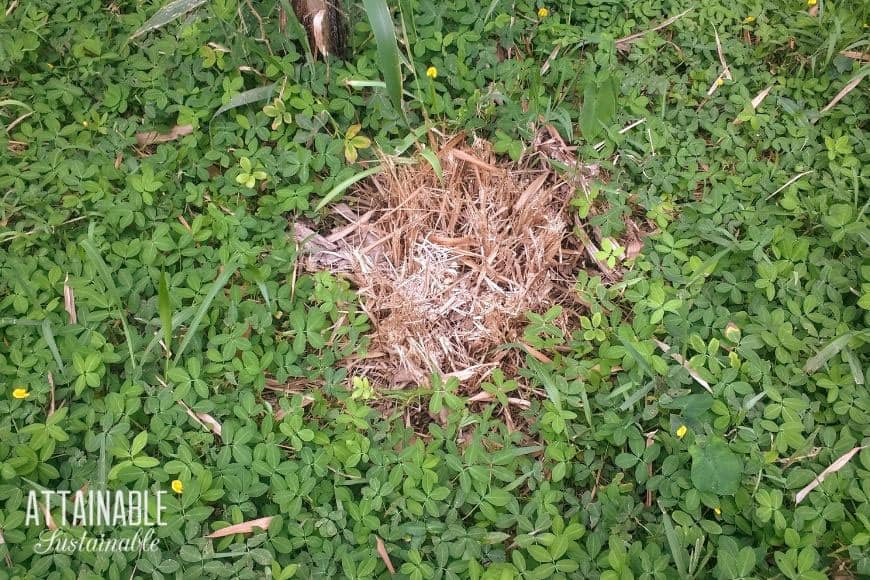 Salt is another indiscriminate weed killer

Fighting weeds in the cracks of your patio? Sprinkle them with salt. Just don’t do it right before a rainstorm when the salt might be washed into the surrounding landscape. You can also use salt directly on weeds, so long as it’s not close to important landscape plants. You can see in the image above where I’ve used this technique to take out a very aggressive clumping grass. I cut the grass to the ground and covered the clump with about four cups of rock salt. In just a few days, the grass was completely brown in a sea of green. Note that the surrounding green is not something I was concerned about damaging. 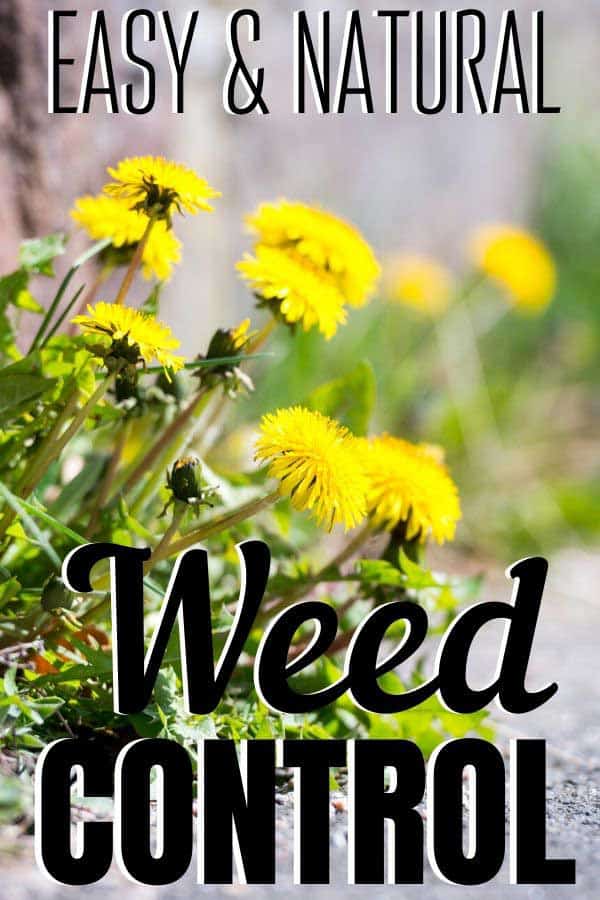 Tilling is a good way to knock down weeds and loosen the soil for manual weed removal. A small tiller can be very handy for weed control, even if you tend toward a no-till garden.

Goats as a natural weed killer

Disclaimer: I don’t have goats. But I’ve seen goats in action, most impressively at my friend Gary’s place. His property was steep and brushy, and in dry California, a fire hazard. He brought in goats and the time it took for them to completely clear the area was nothing short of amazing.

[Here are some things to consider if you want to raise goats.]

Goats as natural weed killers are definitely not an option for small yards, but if you’ve got a large area to clear and you can contain the goats, it’s something I’d look into. They offer natural weed control to the nth degree.

I’ve tried a couple of different “alternative” natural weed control products that I could spray on, in part, because wouldn’t it be awesome if they worked? And they do work, to a point.

I’ve tried the vinegar potion that’s all over the internet as well as a cinnamon based commercial weedkiller. These herbicides are contact killers and will kill the leaves that are sprayed. They are not systemic herbicides that will travel through the plant to kill the roots. Natural weed killers just don’t have the “oomph” of the poisonous sprays.

I imagine that repeat applications of these natural weed killers could shift this into the “successful” column, but with our abundance of weeds and their invasive root systems, it’s just not a great organic weed control option here.

When I talk about weed eradication with people, invariably someone will ask about poison oak or poison ivy. I’ve lived on properties with poison oak (not poison ivy), but thankfully it wasn’t too close to the well-trafficked areas of the property. Our organic weed control for this nuisance amounted to “maintaining” it by cutting it to the ground every year.

You should definitely head on over to Tenth Acre Farm, though, where Amy give a 5-step method for tackling poison ivy. (It’s a slightly different plant, but I’d expect this to work on poison oak as well.)

Another way to deal with weeds? Eat them.