What Does Organic Really Mean?

Parsing the pros and cons of organic farming and how organic crops compare to conventional produce is difficult at best. It seems like every time I mention some of the “drawbacks” of modern, conventional farming, I get backlash from people who think I’m not telling the whole story, who think I’m being unfair to farmers. Who think I’m living in a land of unicorns and rainbows, believing that certified organic crops are untainted with synthetic chemicals.

Not so. I’m fully aware that large-scale organic farms rely on certain chemicals to prevent their crops from succumbing to pests and diseases. I’m aware of these organic farming facts, and that it isn’t perfect — but I still choose organic when I can.

Mind you, I come from a farming family. I am pro farmer. However, since my family farmed conventionally, I spent a good part of my youth in close proximity to chemicals I don’t even want to know about. But are those synthetic chemicals any worse than what’s allowable for organic growers? Why would a person choose to spend more money on organic options? Let’s compare.

My eyes are glazed over from trying to find a simple list of synthetic pesticides allowed for use on conventionally-grown crops on the Environmental Protection Agency’s site. Holy maze of web pages, Batman!

While not strictly crop pesticides, this page has a ton of links to more information about various chemicals. And while not from the EPA, this loooong list of pesticides will give you pause. But surely, if the EPA allows the use of these chemicals, they’re safe, right?

Here’s what the folks at the Natural Resources Defense Council (NRDC) have to say about that:

The public may think pesticides are only allowed onto store shelves and for use in agriculture and into consumer products if they have been approved by the U.S. Environmental Protection Agency (EPA) in a transparent and scientifically rigorous process. Recent investigations by the Natural Resources Defense Council (NRDC), however, reveal a deeply flawed system, indicating that the public’s trust is misplaced. NRDC spent several years examining federal government data and interviewing key officials, and has determined that the government has allowed the majority of pesticides onto the market without a public and transparent process and in some cases, without a full set of toxicity tests, using a loophole called a conditional registration. Hazardous according to EPA?

And on the EPA’s agricultural pesticides page, the EPA itself is citing potential hazards:


Within the last few decades, scientists have learned that some pesticides can leach through the soil and enter the groundwater below. While 50% of the nation depends upon groundwater for drinking water, almost 95% of the households in rural areas use groundwater as their primary source of drinking water. The impact of agricultural chemicals on surface and groundwater quality has become an issue of national importance.

Many pesticides, even when they are applied legally, in accordance with label directions, may leave residues in or on treated fruits, vegetables, grains and other commodities. Though pesticide residues often decrease over time as food crops are washed, stored, processed, and prepared, some residues may remain in both fresh produce (like apples or tomatoes) and processed foods (like applesauce or tomato catsup).

The health effects of pesticides depend on the type of pesticide. Some, such as the organophosphates and carbamates, affect the nervous system. Others may irritate the skin or eyes. Some pesticides may be carcinogens. Others may affect the hormone or endocrine system in the body.

What else is allowed in conventional farming?

Farmers are now using glyphosate not only to control weeds but also to dry down wheat, rice, sugarcane and other crops just before harvest, resulting in higher residues in the foods we eat. ~Mother Earth News 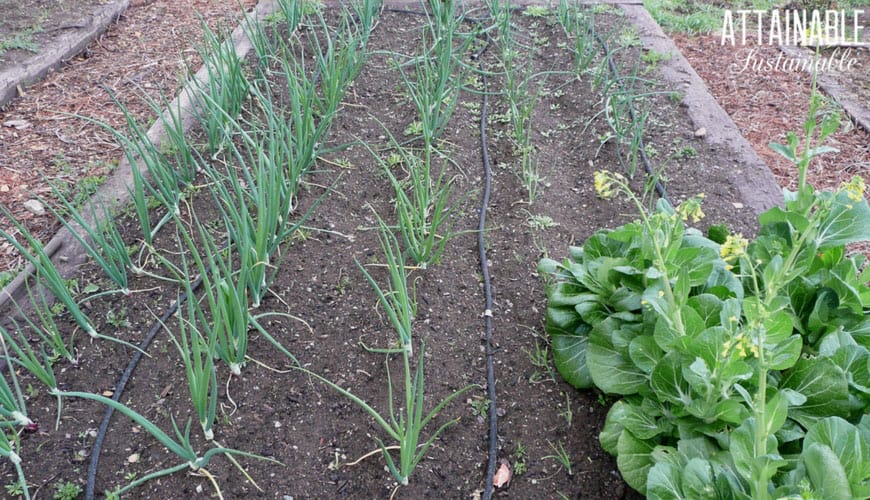 The pros and cons of organic farming

The National Organic Program (NOP) sets the standards that govern the use of the term “organic” in marketing crops and processed foods. According to the Environmental Protection Agency:

The list of allowable synthetic substances and materials for organic farming is lengthy, but I found it a bit telling that I could even find a complete list.  It includes items like hydrogen peroxide, liquid fish products, sticky traps, insecticidal soaps, and newspaper or plastic mulch. It also includes things like paracetic acid, streptomycin, and tetracycline (though the latter two are no longer allowed after October 21, 2014).

I’m not gonna lie. I’m not a scientist. I don’t know exactly what a lot of those substances are, nor do I know the health or environmental impacts of using them. The EPA seems to think they’re “safe” enough to be used on organic crops. But I’m not convinced that the EPA has got our best interests at heart.

Another thing to consider about organic crops

The NOP prohibits the use of transgenic engineering, ionizing radiation, and sewage sludge.

Given the choice between conventionally grown crops and crops grown with organic farming methods? These limitations and the shorter list of allowable chemicals make organically grown produce the obvious choice for me.

But there’s a third option that I like even better.

Organically grown but not certified organic

Organic farming can be cost prohibitive because of the required certifications.

Small scale farmers often produce crops using alternative methods. And without the use of synthetic inputs, even though they’re not certified organic. By choosing to avoid the addition of harsh chemicals, these growers are helping to maintain healthier soil, safer water tables, and farm workers. And while the fruits and vegetables produced in this manner might not be as pretty, they are free of questionable chemical residues.

By seeking out a local CSA or shopping at a local farmers market consumers can speak directly with the grower. They can ask questions about how they control pests and diseases in their crops.

If we’re not growing our own, doesn’t it make sense to know who is?

Previous: Practical Preppers: How to Be Ready for Anything (Without the Panic)

Next: The NFL and Breast Cancer Awareness: Unclear on the Concept