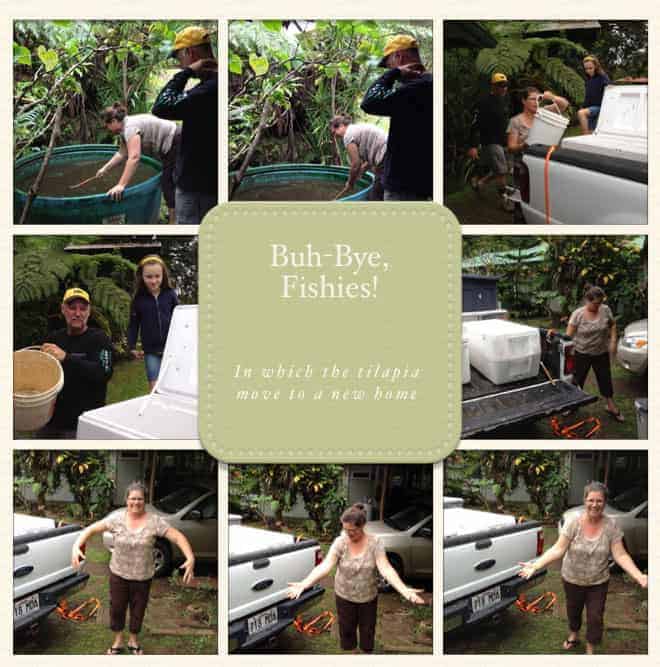 Search the Internet and you’ll find all kinds of sites about raising tilapia: Instructions for building elaborate aquaponics systems, forums full of (sometimes contradictory) advice, specifications for proper pumping systems based on number of fish, feet of lift, and gallons per minute. So many calculations! It seemed like raising tilapia was maybe a bigger project than I wanted to tackle.

But my friend, Leslie, insisted that it’s not that hard. And she offered up a tilapia tank and fish so that I could give it a go. (Leslie was so happy to send fish home with me that she made that clever collage up there.)

It’s been about six months since we set up our tank and we’ve only had a few mishaps, including an unfortunate siphoning accident (thank goodness we were home), one fish dead (unknown reasons), and two “saves” after a fish jumped out of the pond and landed on the ground.

If you’ve considered tilapia farming, you might find our experience helpful.

Ours is a 6′ diameter poly stock tank that holds about 350 gallons. It came outfitted with a PVC overflow allowing the water to escape when it hits a certain level. I’m not 100% sure this is necessary. Situated properly, I think you could just let the water reach the rim and overflow. 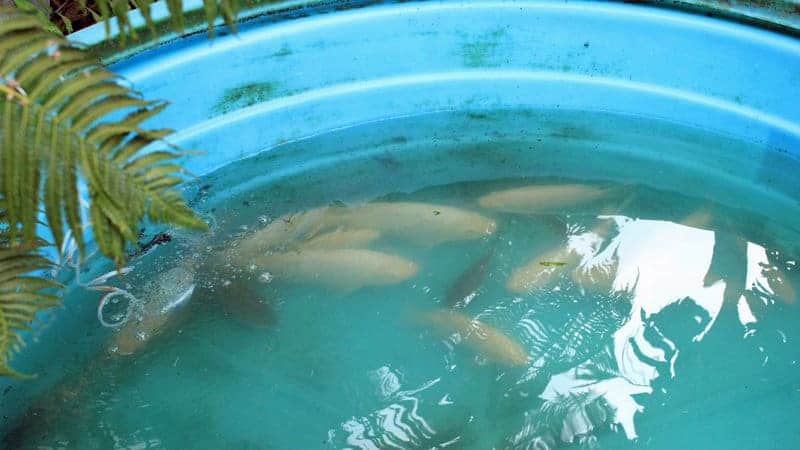 This is what the water looked like when we first got the fish home. You can see the bubblers behind the fern fronds.

I’m using a simple aquarium pump with two air outlets. The pump came with hose and little bubblers that push oxygen into the water. A single bubbler doesn’t seem to be sufficient for this size tank. If I need to replace the pump, I think I’ll go with one that allows for four bubblers.

With no other options, we did use municipal water to initially fill the tank. We were only able to allow the water to sit for an hour or so before we put the fish in it, so I googled like crazy and found information about adding vitamin C to remove the chlorine and chloramines. Did it make a difference? No way to know, but we didn’t lose any fish in the early days.

Tilapia are algae eaters, so a little algae is actually a good thing – free food! Currently the water in the tank is terribly, embarrassingly green. Too much algae. My next step is to divert a roof gutter so that when it rains, the tank is replenished with clear water.

UPDATE! We’ve had two sets of fry hatch out in the past six weeks. Here is how I discovered the first hatch: Big tilapia mouths at the surface of the water. They’re dying! I thought. Not enough oxygen! I thought. Then I looked more closely and saw hundreds of tiny fish, all in peril from those big tilapia mouths. For the first hatch, I created a “safe zone” from some screening material. After several weeks I let them all mingle. Seems like about a dozen of those tiny fish have survived. The second batch? Interestingly enough, the big tilapia seem not at all interested in eating these. Or at least they’re not being so obvious about it.

When we first set up the tank we had an issue with mosquitoes. Despite what I’d read, the tilapia were not managing the population of larvae in the water. Solution: I added half a dozen small goldfish to the tank. Now there’s not a mosquito larvae to be found.

Leslie had been feeding standard koi pellets daily. I located a source for organic fish food (since we do intend to eat these guys) and started using that right away. The fish never seemed to eat the pellets, though, so I started stretching the feeding out. Currently, I’m tossing about a quarter cup of feed into the tank two or three times a week.

We’ve harvested two of the tilapia so far. These are tough fish. Without giving too much gruesome detail, I will tell you that they are not easy to kill. I think the next time we harvest a fish, we might simply do as ocean fishing people do and let the fish chill on ice.

The first fish we cooked was terrible. Horrible. It tasted like swamp. I was so disappointed; I wouldn’t be able to get anyone to help with the process of harvesting these swampy fish, let alone eating them. A little more research turned up information on purging the fish before eating it. Essentially, this means moving the fish to clear water for several days to remove the swampiness. We separated our second fish and left it in clear water for three days and it made a huge difference. Next time we might try four or five days. Tilapia is never going to be as tasty (in my opinion) as ahi, but for an on-site protein source it’s a keeper.

Next: Hawaii Coffee and How to Grow Your Own