Oregano Flowers: Fresh and Edible from the Garden

We talk often about using the fragrant leaves of the plants we grow in our herb garden, but the flowers are often a little bonus. If you limit yourself to using oregano leaves in your cooking, it’s time to branch out! Oregano flowers are edible, too!

Go here to learn more about a variety of edible flowers you can grow in your garden! 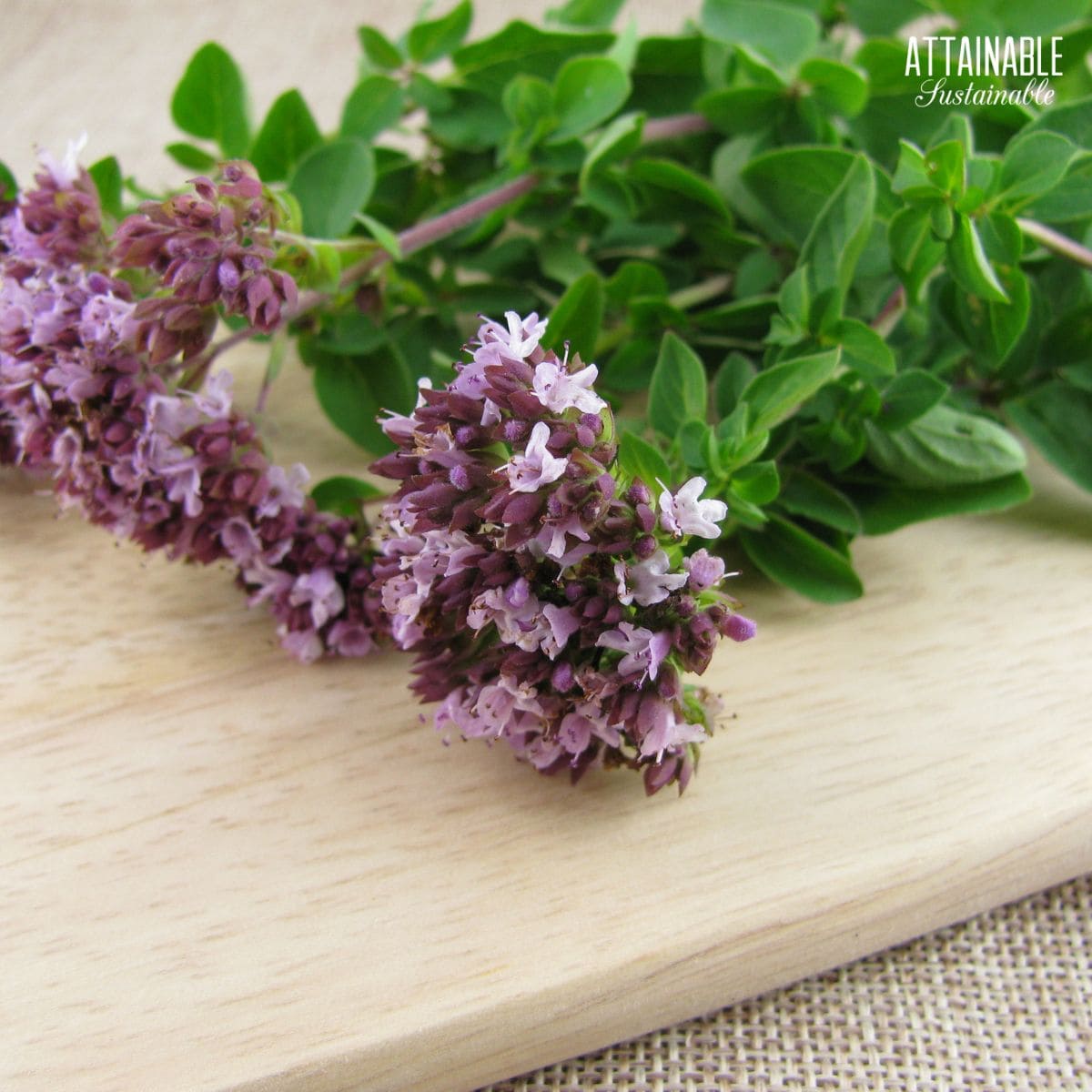 Oregano is a woody herb with leaves that are essential to any cook. Culinary oregano is great in an herb garden, but this popular herb is also beautiful in your perennial and annual flower beds. Plant it in full sun where it will have good drainage.

Oregano plants are perennial, meaning they’ll come back year after year. They’re a great addition to a front yard garden, acting as a nice filler plant that will begin to produce flowers in early spring. This Mediterranean plant grows well in containers, too, so it’s a good addition to a balcony garden. Learn more about growing oregano plants here.

Oregano flowers are especially attractive to bees and other beneficial insects, but they have culinary use for humans, too. While most of us are familiar with using dried or fresh oregano leaves in our cooking, the idea of using the flowers might seem odd.

I suspect this is in part due to the fact that instructions for harvesting oregano leaves usually calls for doing so just before the flowers bloom. That could lead a person to think that oregano flowers are not good to eat. This is not true. 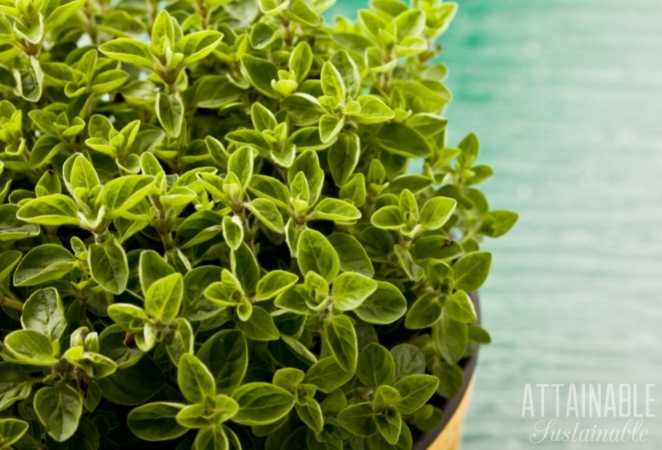 Greek oregano (Origanum vulgare var. hirtum) has an intense, spicy flavor used in many different kinds of cuisines. It has white flowers.

Mediterranean oregano (Origanum vulgare) is a milder type of oregano and the one most commonly found in grocery stores.

Italian oregano (Origanum. x majoricum) has a bit of the sweet, perfumy scent of a similar-tasting herb called marjoram. The flowers for this variety of oregano are tiny and pink.

Golden oregano (Origanum vulgare ‘Aureum’) has yellow golden foliage. In the early summer, the leaves of this pretty fresh herb are covered in delicate pink and purple flowers.

Two crops often identified as oregano are actually not the same as true oregano. Originating from Mexico, Guatemala, and some parts of South America, aptly named Mexican oregano is actually part of the verbena family.

Cuban oregano has fuzzy round leaves and is a succulent plant. While it can be used similarly to common oregano, it has a strong flavor and should be used in smaller quantities in recipes calling for the mediterranean herbs we know as regular oregano. 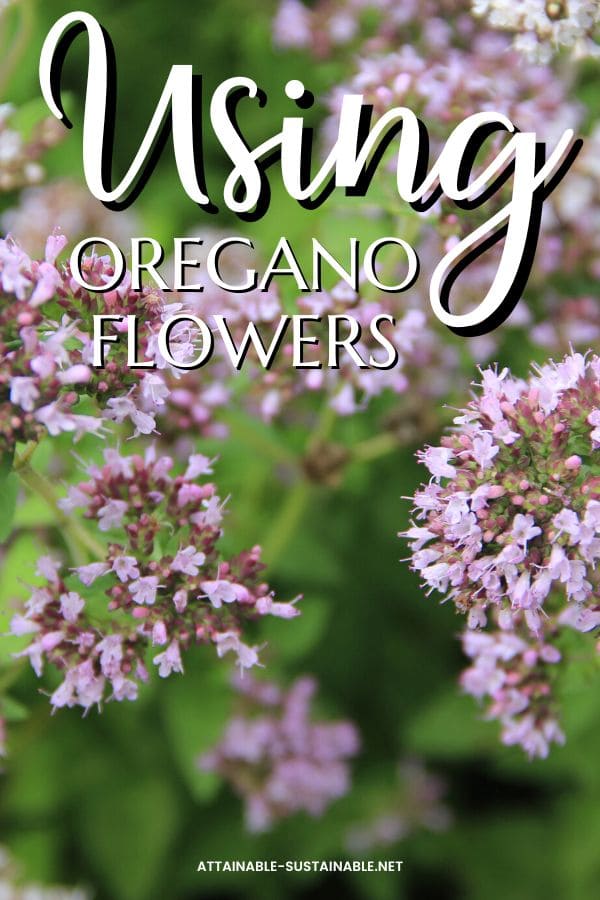 The blossoms of an oregano plant are actually quite small — just 3-4 millimeters across — but they are borne in spikes, making them more visible on the plant. Clip just the flower spikes or flowers and branches. Pull the leaves and flowers from the stems by clasping the stem between thumb and forefinger and running it down its length.

The leaves of oregano are most flavorful after plants have had a chance to grow into mid-summer. Harvest oregano leaves and blossoms in the cool morning just after the dew has evaporated to ensure superior flavor.

Use sharp scissors or pruners to clip the stem tips, but leave 4-6 pairs of leaves on the plant. Harvesting in this manner will help the plant become more compact, but bushier.

Oregano flowers have a less intense flavor than the fresh leaves. If you’re using them to replace oregano leaves in a recipe, you may need to increase the quantity. More likely, you’ll be chopping the flowers and leaves together for use in the kitchen. 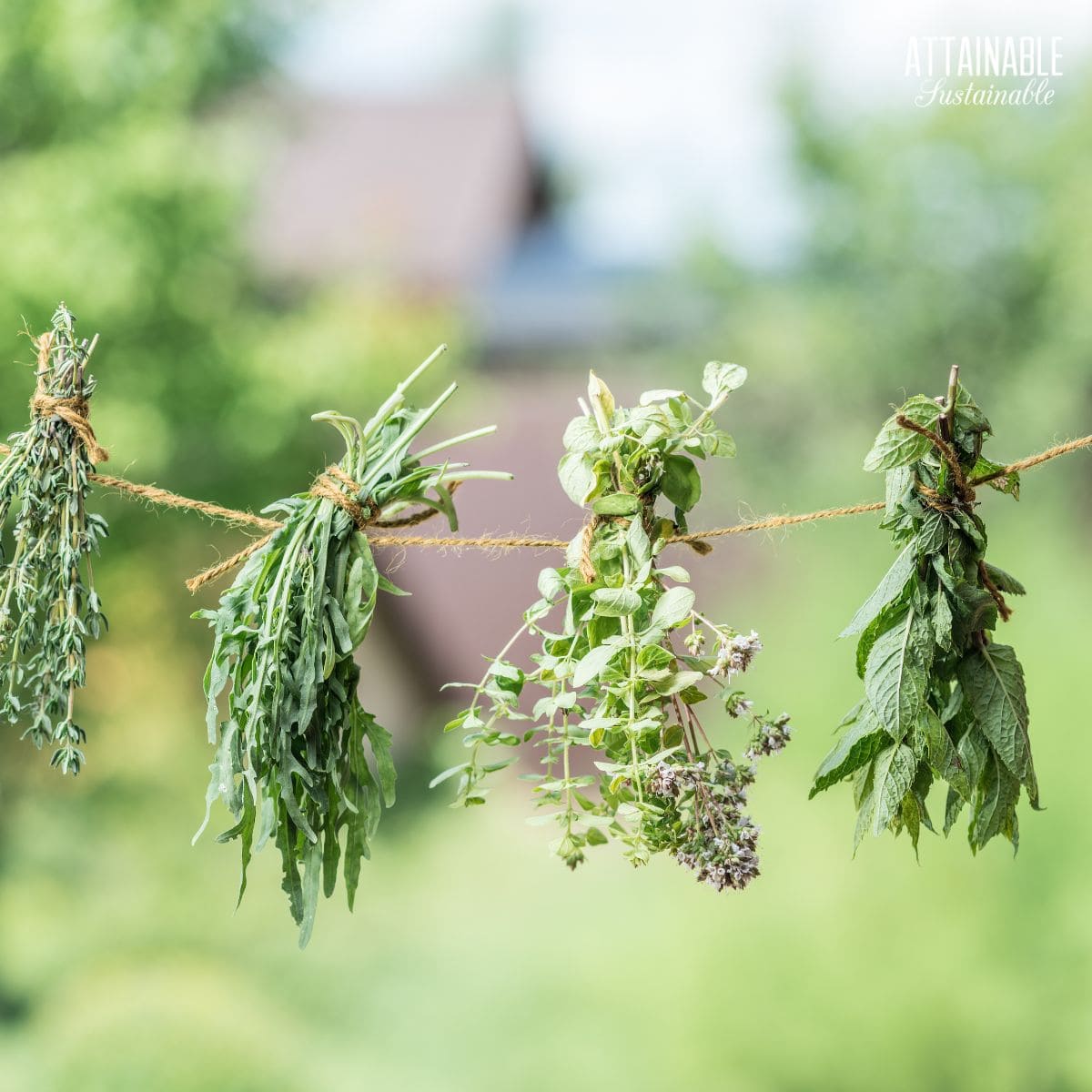 Drying oregano leaves and flowers means you can enjoy them all year long as ingredients in cooking or in oregano tea. There are several different ways to dry this perennial herb for the spice cabinet.

To freeze oregano leaves and blossoms, chop them, press into ice cube trays, and then pour olive oil over the top to cover. Once frozen, transfer cubes to an airtight container and store in the freezer. To use, pull out a cube and stir into hot soups and tomato sauces, or saute in a frying pan for making egg dishes.

Although you don’t need anything fancy to dry most herbs, oregano has a high moisture content and can mold if the drying process takes too long. Using a food dehydrator offers a more controlled environment and hastens drying.

If your home is warm enough, air drying is a possibility. Cut stems of oregano with the flower buds and blossoms, bundling them together using a twist tie or rubber band. If you’re concerned about dust, you can wrap the bundles loosely with muslin or sheets of newspaper to keep off the dust, or snip a slit in the bottom of a paper bag and put the stems through.

Hang bundles in a warm, dry space that gets plenty of airflow. Use an S hook to hang the drying herbs from a pretty shelf or if you’re lucky enough to have high rafters, string them up there until they’re thoroughly dried. Because heat rises, the air is warmer near the ceiling and will help speed drying. 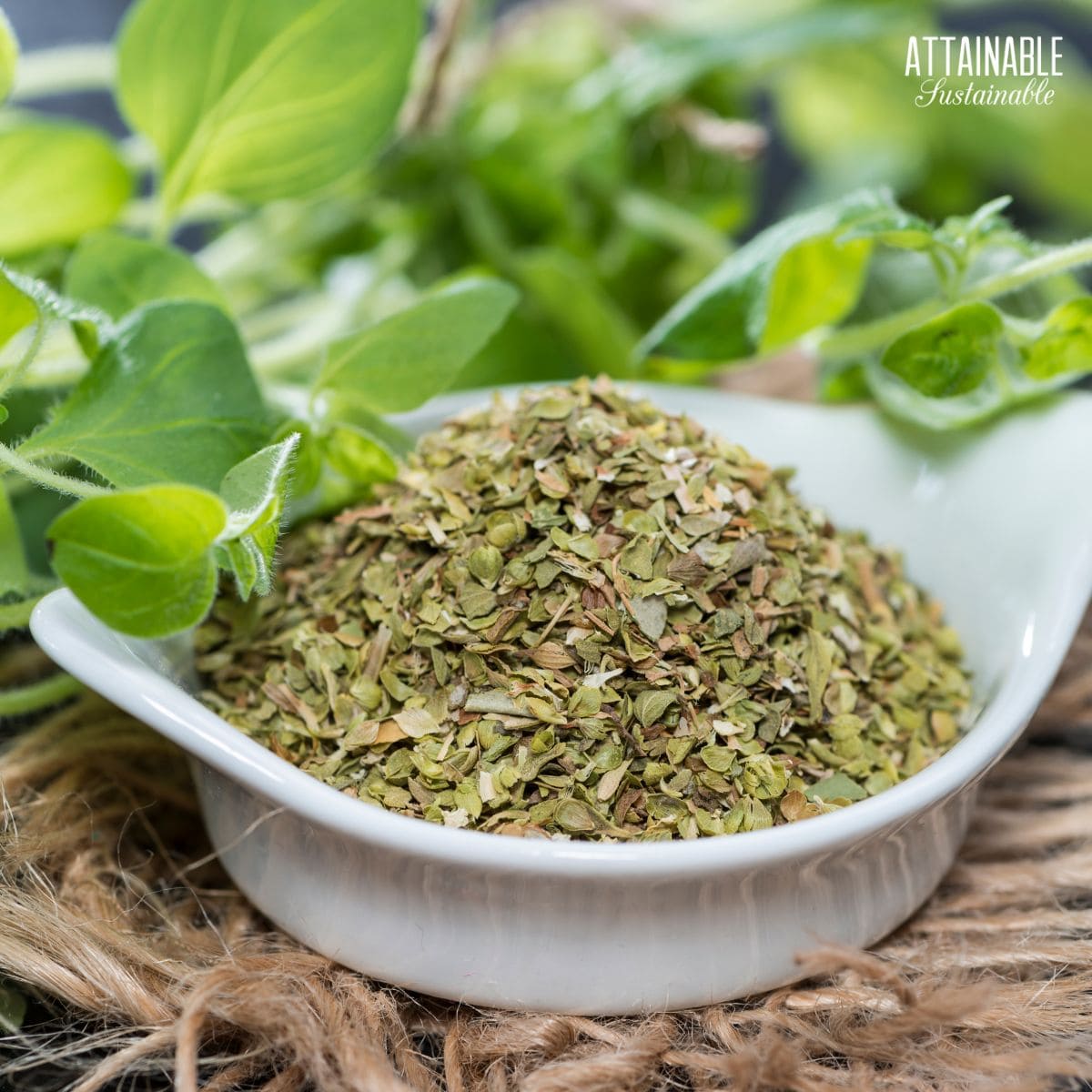 Create an inexpensive drying rack at home with an upcycled picture frame from a thrift store. Cut a window screen so it’s just a bit larger than the frame and attach the screen to the frame using a staple gun. Set the rack on blocks so air will flow all around the oregano. In a pinch, you could even borrow a window screen from an unused window of your house. Avoid setting herbs in the direct sun.

To dry herbs in your oven, place the leaves and flowers on a cookie sheet in a single layer. Turn the oven on low, and prop open the oven door. If yours is a newer oven with dehydrating setting, or even a bread proofing setting, use that; otherwise, aim for a temperature no higher than 180°F. It will take two to four hours for herbs to completely dry.

About the author: Kris Bordessa Kris Bordessa is an award-winning National Geographic author and a certified Master Food Preserver. If you want to send Kris a quick message, you can get in touch here.