You are here: Home / EAT / Meals / How to Make the Best Fried Red Potatoes Ever 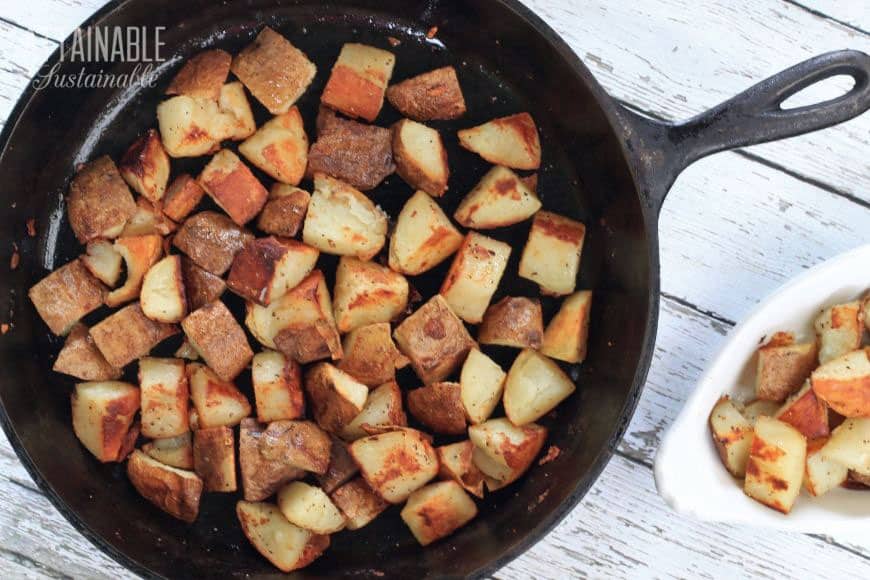 Many years ago my husband announced that he’d be happy to eat potatoes at least once a day. The man loves potatoes. Baked, fried, in a potato salad, as hash browns, you name it. We eat potatoes regularly in some form or another. Happily, potatoes are inexpensive to buy. Even better? We’ve had good luck growing potatoes here.

I have several little tricks I want to share with you.

Number one: Start with partially cooked potatoes. There are two ways you can do this. You can cook the red potatoes in an electric pressure cooker (like the Instant Pot) or you can bake them in the oven.

Pre-cook the red potatoes until they’re just beginning to soften. Don’t overcook them. In the Instant Pot, it takes about five minutes on manual. In the oven, 30-40 minutes. This will, of course, depend on the size of the potatoes. If you can plan ahead, it will be easier to cube the potatoes once they’ve had a chance to cool down. 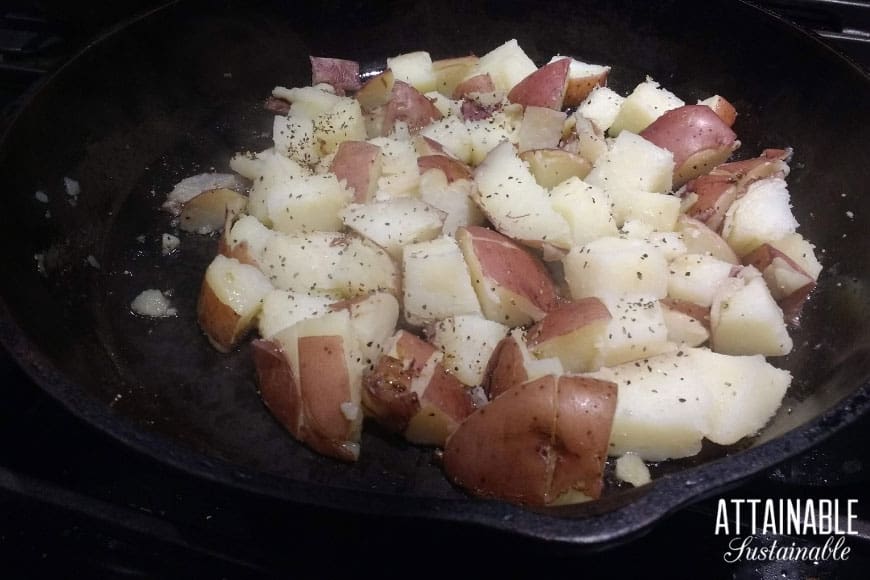 Number two: Don’t even think about putting the potatoes in the frying pan until it’s HOT. I use my cast iron pan for this. Faithfully. If you don’t yet have a cast iron pan, you can get by with what you have, I’m sure, but you should really consider keeping your eyes open at garage sales for cast iron. They’re the best!

Number three: You want fried red potatoes that are browned and crispy without getting stuck to the pan? As soon as you transfer the potatoes to hot pan, shake the pan. Like you’re making old-school popcorn. And then do it again. And again in another minute. This causes the red potatoes to form a cooked “skin” if you will, preventing them from sticking to the pan. Number four: Walk away. Well, not really. You’re probably cooking other dishes to go with these fried red potatoes. But don’t mess with them. Let the potatoes cook on high for about ten minutes. No stirring, no flipping. This creates a nicely browned crust on each little potato cube. ★ Did you make these fried red potatoes? Don’t forget to give them a star rating below! ★ If you want your fried red potatoes to be a bit creamy on the inside, with a crispy, crunchy, browned outside, here's the secret & what you need to know.

Decadent Double Chocolate Muffins with Chocolate Chips
Next Post: Top Your Salad with this Radish Leaf Salad Dressing Fresh from the Garden