This cast iron skillet apple pie recipe always brings people back for more. The rustic presentation combined with the flavors of fall are a show stopping dessert every time. If you haven’t yet, it’s time you learned how to make apple pie at home so you can skip the frozen alternatives from the store.

This apple cobbler recipe is another favorite! 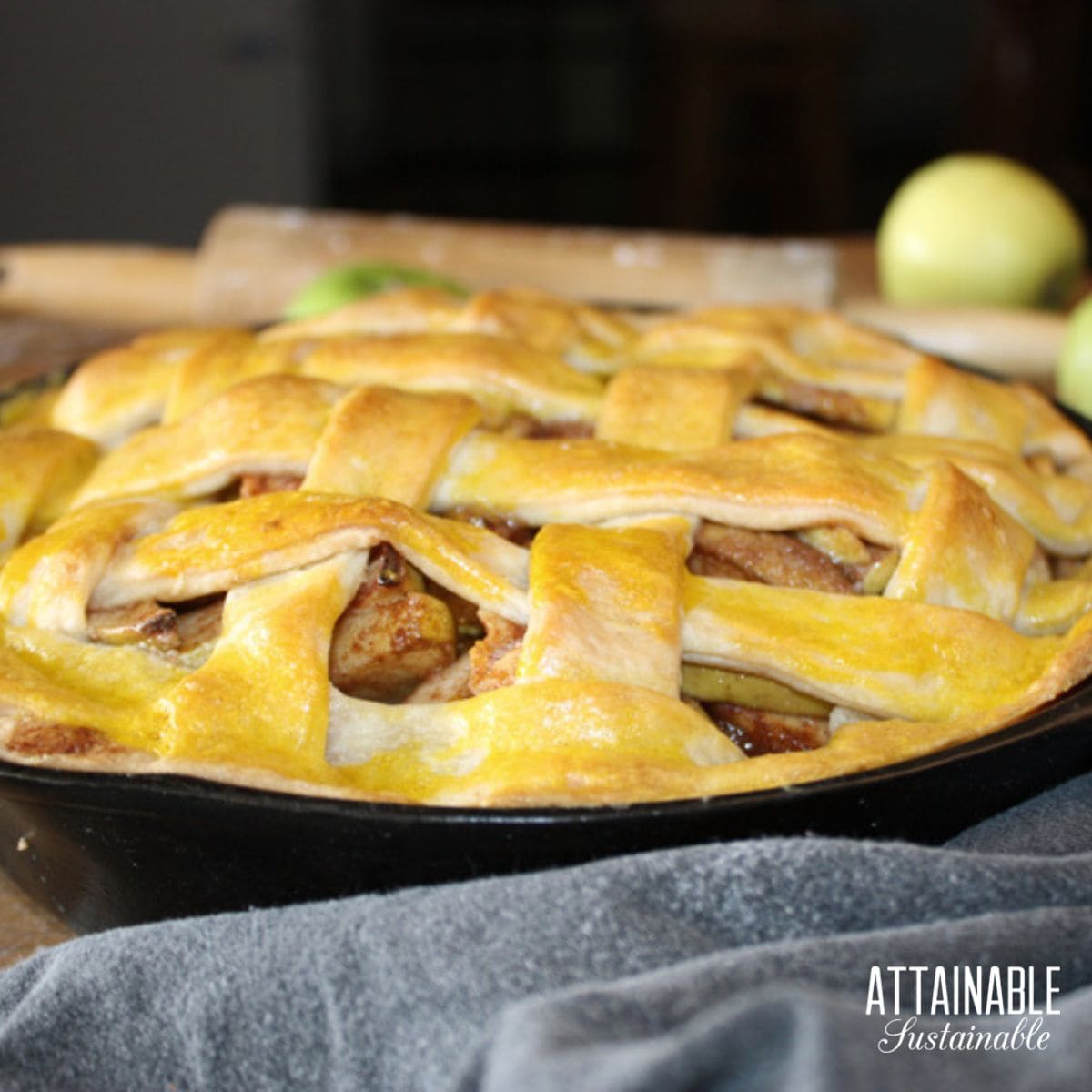 Is there anything better than pie baked in cast iron? This skillet apple pie is no exception with crisp, tart apples tossed with cinnamon and nutmeg, baked up in a flaky pastry crust. Top it off with vanilla ice cream and it’s sure to be everyone’s favorite!

We have three apple trees that, unfortunately, have never produced fruit in the seven years we’ve lived on our property.

This past winter we had to cut down a standing dead tree that always blocked those apple trees from afternoon sun. We were beyond thrilled when our little trees were dripping with fruit this year! But with all that fruit we were faced with a new dilemma…what to do with all the apples? (Not a bad dilemma to have, right?)

Our go-to for a surplus of pears is always to dehydrate them or make fruit leather, so we followed suit with the majority of the apples. But I had to bake an apple pie when blessed with such a bounty.

Apples — What kind of apples is a matter of taste, really, but my absolute favorite is the Gravenstein apple. Check out this list of top pie apples for more ideas on which varieties work well. What’s available in one region might not be in another! How many apples does it take to make apple pie? You’ll need about a dozen fresh apples to fill a 9″ pie dish.

Pie crust — Yep, I make this from scratch, using my Grandma’s pie crust recipe. It uses basic ingredients (and one surprise one!) and is easy to make. It makes two crusts, one for the bottom, one for the top. If you don’t want to make your own pie crust, you can certainly use this recipe with one of those folded, frozen crusts.

Flour — When I bake with all-purpose flour I opt for the unbleached option. Bleached flour is very white, but it’s also treated with bleaching agents that I don’t really need in my food.

Sugar — Use your favorite brand of granulated cane sugar. I prefer organic.

Seasonings — Cinnamon gives this recipe the flavor that we (or at least I!) associate with harvest season apple pie.

Ready to scent your home with a freshly baked skillet apple pie. It’s time you learned how to make apple pie!

Making an apple pie requires several steps. It’s not as easy as buying a frozen pie, for sure, but the flavor is well worth the effort! 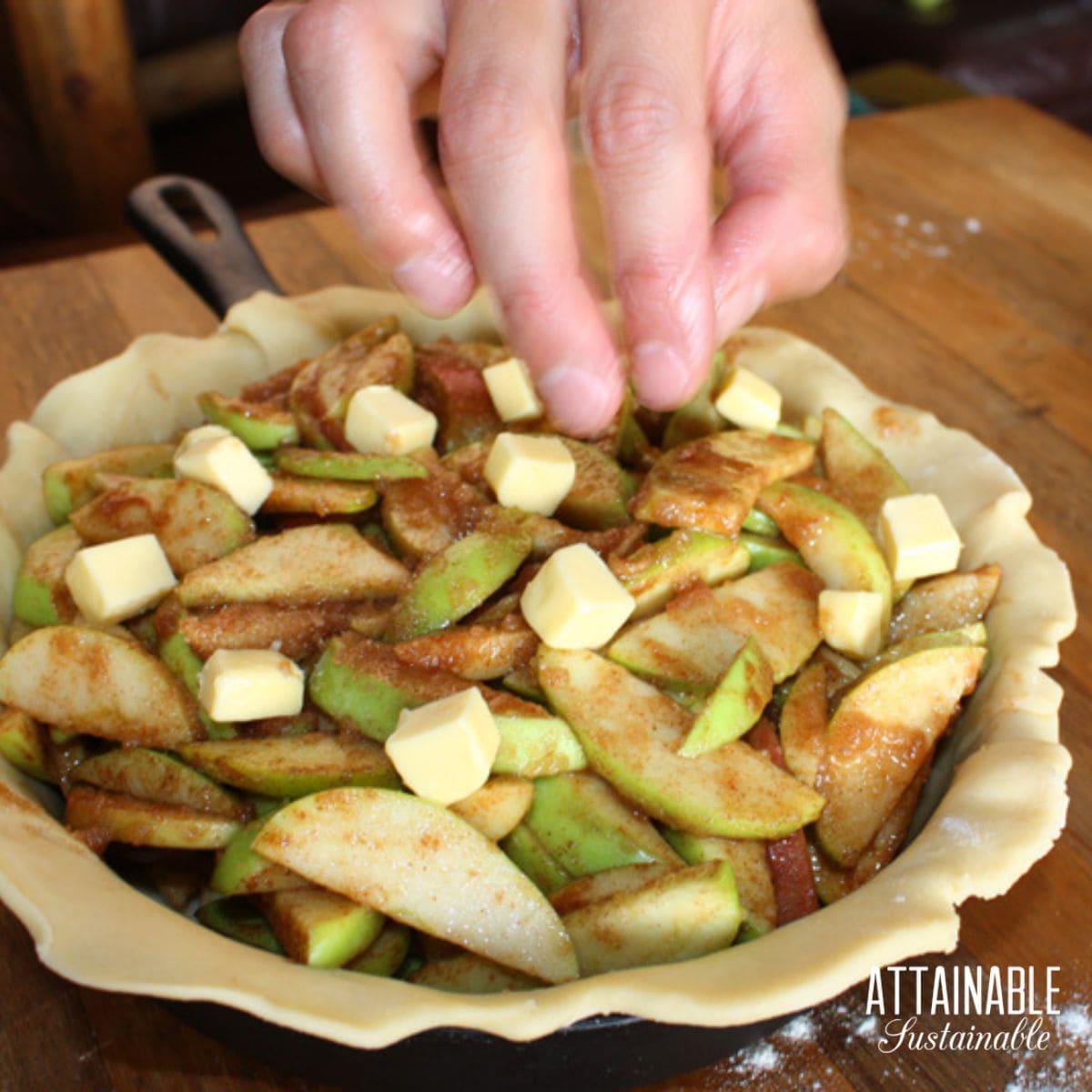 Peel and slice the apples, then toss with the filling ingredients in a large bowl. Making this ahead allows the apples to get more juicy before putting them into the crust. Set aside and carry on with the making of the pie crust.

A good pie starts with a good pie crust. The recipe included below is my grandma’s and it’s what we’ve used for years.

Start by cutting the butter into the dry ingredients with a pastry cutter until it becomes a fine crumble. This evenly distributes the butter throughout the crust.

Once the butter is incorporated, add the liquids, just until the ingredients come together in a shaggy ball.

Pie crust doesn’t need to be kneaded like bread dough. When making homemade pie crust with butter, avoid over-working the dough. Blend the pie dough ingredients just until they come together.

This recipe makes two pie crusts. That is, enough to make one pie with a top and bottom crust or two single-crust pies. If you only need one of these, you can freeze the other for another pie another time.

Rolling out the Dough

Transfer prepared apples to the dough. Don’t be afraid to heap them up; they will cook down substantially during the baking process.

Repeat rolling process with the second portion of dough. This time, though, you’ll cut the dough into strips to create the lattice top you see here. 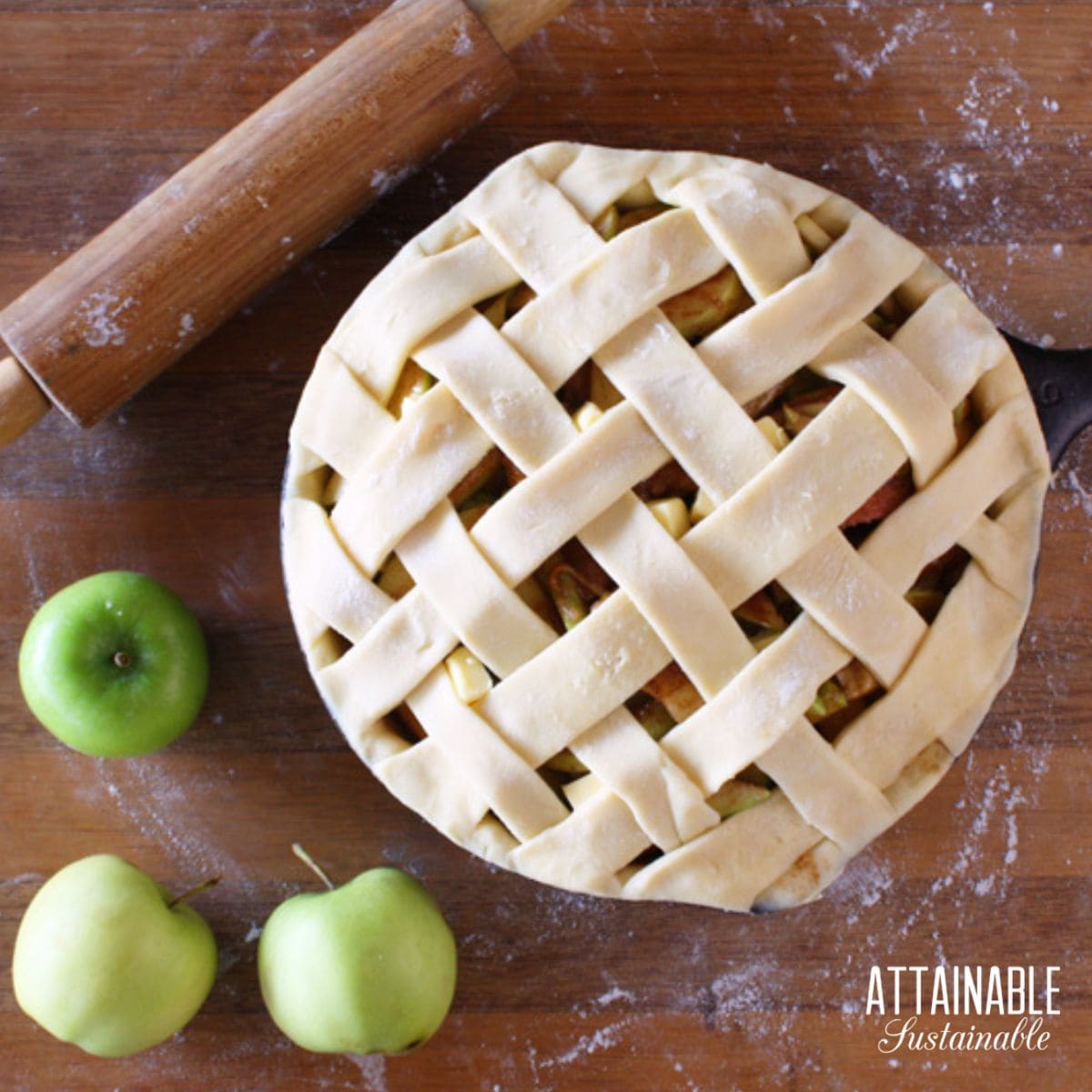 Seal the edges of the crust and bake until browned and apples are bubbly.

Looking for more ways to use your abundant crop? I’ve gathered some of the best apple recipes from my collection for you right here! 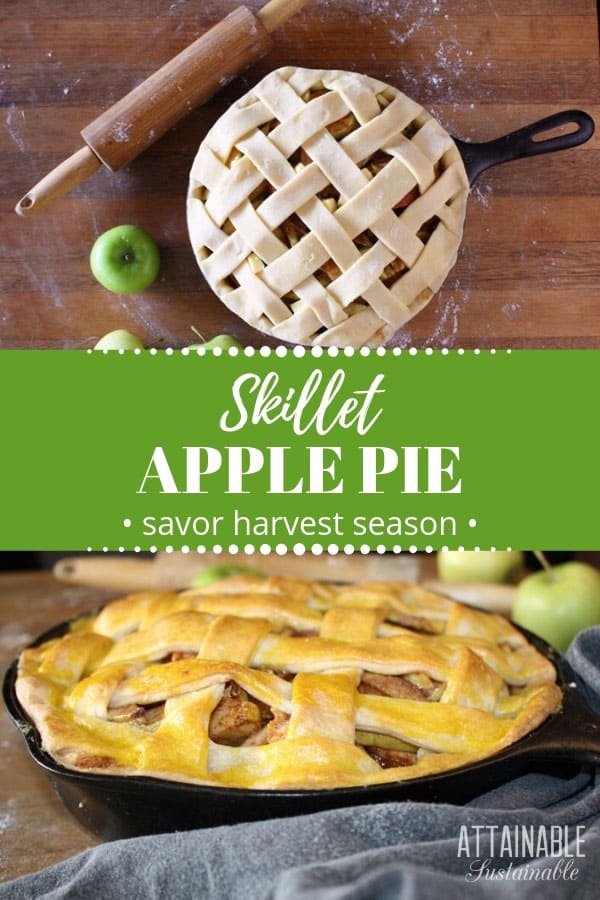 ★ Did you make this skillet apple pie recipe? Don’t forget to give it a star rating below! ★

If you do not have a cast iron pan, you can use your favorite glass pie pan.

Originally published September 2017; this post has been completely updated.

About the author: Kelsey Steffen is a daughter, wife, mom of four, aspiring farmer and home-school educator in North Idaho. She’s a lover of sourdough and has been baking since before she could see over the countertops. She wrote an eBook teaching the basic principles of getting started with sourdough baking for the everyday home cook, you can find it here. Join Kelsey and her family over at Full of Days as they blog about life in the Steffen household, and follow along with them on Facebook, Pinterest, and Instagram where they share more of the “behind the scenes” parts of life!