This easy apple cobbler recipe makes a perfect not-too-sweet dessert to savor the apple harvest. Serve it with a scoop of vanilla ice cream!

Looking for more ways to use your abundant crop? I’ve gathered some of the best apple recipes from my collection for you. I grew up on an apple farm. From late August until mid-October we had fresh apples in bowls on the counter, in boxes in the barn, and hanging from the tree. Apples everywhere! An apple a day? Ha! More like half a dozen. And there’s nothing like a freshly harvested apple.

But besides eating them fresh, apples desserts were plentiful during harvest season. This apple cobbler recipe is one we’ve made for years. [And be sure to try my mom’s apple pie recipe, too!]

What’s the difference between a cobbler and a crisp?

The difference between an apple cobbler and an apple crisp is in the topping.

This is a cobbler, but it does maintain a bit of crispness, which is why we like it. 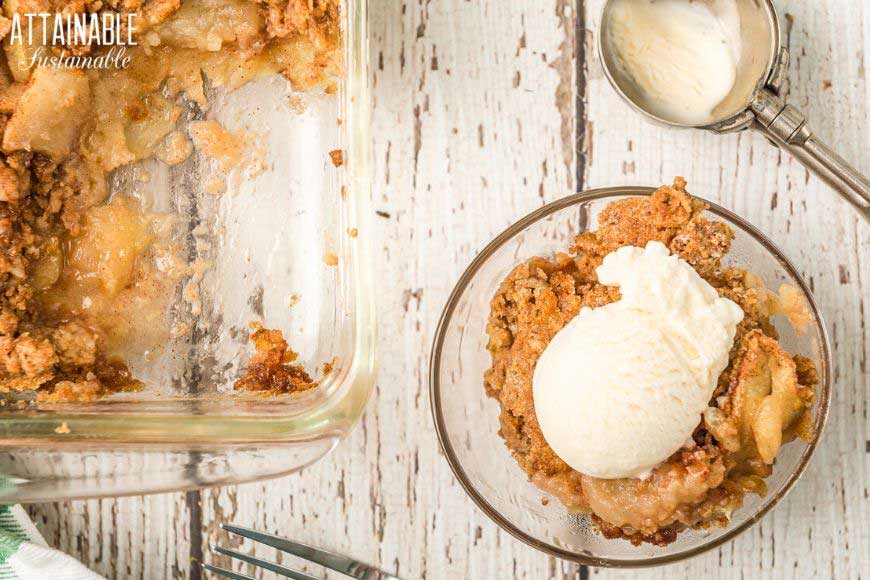 This recipe originally came from one of those community cookbooks created by a coalition of apple farming families. I remember my mom working with a group of women to collect vintage family recipes from all over the apple growing community. The original apple cobbler recipe was much too sweet for our tastes, so I’ve modified this recipe to use less sugar.

I love making apple desserts from Gravenstein apples, but they’re not commonly available. Granny Smith apples are a good choice, as is any other slightly tart apple.

This recipe can be modified to work for a gluten free diet by substituting cassava flour for the all-purpose flour in this recipe. ★ Did you make this easy apple cobbler recipe? Don’t forget to give it a star rating below! ★ 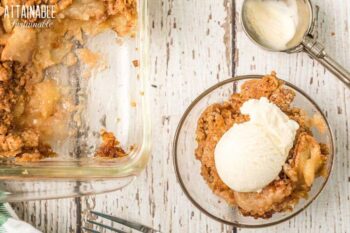 Quicker and easier than an apple pie made with double crusts, you'll love this easy apple cobbler! See my notes to make it a gluten free apple cobbler.

The number of apples you use in this apple cobbler will depend upon their size. Just be sure that your pan is filled to the brim with apples. As the apples cook, they will soften and settle.

To make this a gluten free apple cobbler, use cassava flour instead of all-purpose flour.

Originally published in November 2016; this post has been updated.

Homemade Caesar Salad Dressing that gets *Raves
Next Post: How to Have the Best Organic Soil in the Neighborhood