You are here: Home / EAT / Dessert / Fresh Lemon Meringue Pie Like Grandma Made

This homemade lemon meringue pie recipe might just be the perfect dessert. With a sweet & tangy filling, a flaky pie crust, and a fluffy meringue, it’s no wonder lemon pie is such a  favorite here. Top it with a sprinkle of crystallized ginger for an extra little zing!

My mom’s apple pie is pretty great, too! 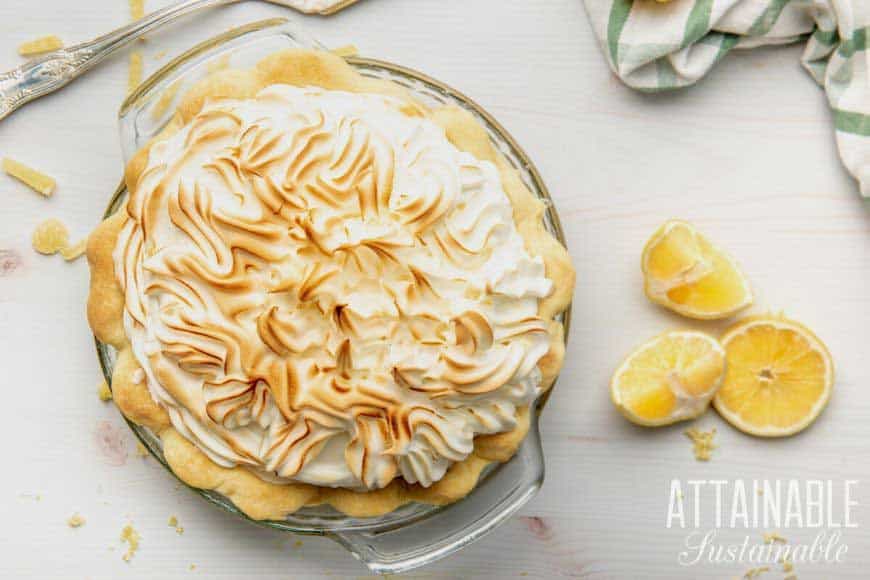 There are three parts to making this lemon meringue pie recipe. One, the crust. Two, the filling. And three, the light and fluffy meringue. Those three elements, along with a surprise burst of ginger, come together to make what some people (say, my husband) might consider the perfect dessert. While making a lemon pie from scratch may take a few steps and require some planning ahead (to let the crust rest), it’s not particularly difficult.

This recipe is a halved version of my grandma’s famous pie crust. It makes a single crust, perfect for filling with lemon. In the case of this lemon pie, you’ll bake the crust before filling it. This is called blind baking. You can make a fully baked or partially baked pie crust using this method. Since the lemon filling for this pie does not need to be baked, the crust should be fully baked. (You’d use the partial blind baking method for making a recipe such as quiche or even pumpkin pie, if you wanted a really crispy crust.)

Forming the crust and refrigerating it for several hours or overnight is recommended. This helps it to retain its shape during the baking process.

When baking a pie crust sans filling, it can have a tendency to puff up, creating air bubbles. We don’t want that. There are two tactics you can use. The first is called docking, in which you use the tines of a fork to create lots of little air holes in the bottom of the crust. This is the method I’ve always used, and it’s been sufficient. 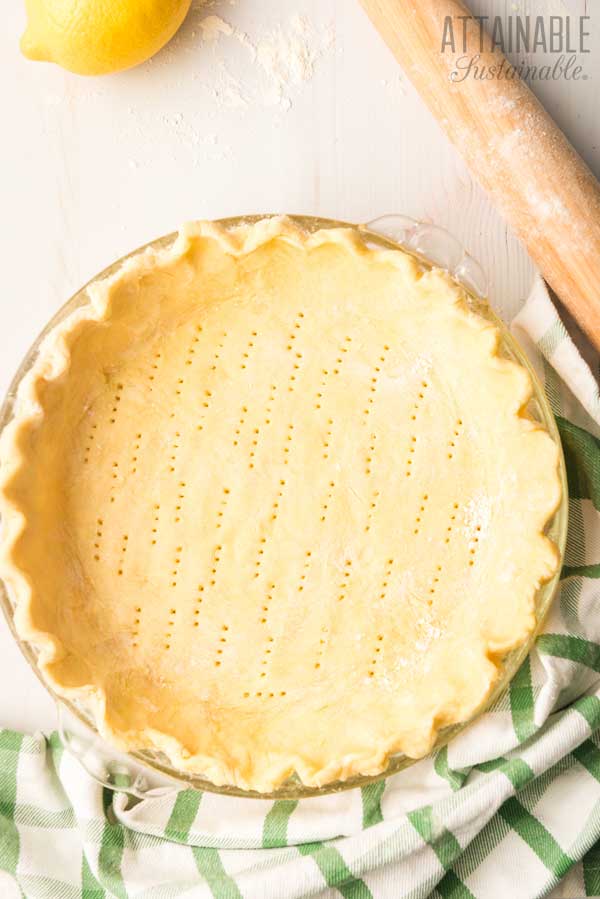 You can also use weights. Pastry chefs (who are likely much more accomplished bakers than I) use little round ceramic weights to hold down the crust when blind baking it. If you don’t have weights but want to use this method, you can use dry beans. To use pie weights, cut a piece of parchment paper slightly larger than the crust. Set it inside the pie crust before baking and add weights. (Two to three cups of beans should do the trick!) Bake as instructed, but lift the weights out of the crust about halfway through the baking time. This allows the bottom to brown.

The filling for this lemon meringue pie recipe is cooked on the stovetop. The sugar and lemon mixture will thicken as it cooks, thanks to the cornstarch. The yolks are added once the filling is cooked. Combining the hot filling with the eggs yolks quickly will result in lumps of cooked yolk, though. Don’t do that. Instead, to add the egg yolks to the mix, you’ll temper them. This requires adding some of the hot lemon mixture to the whisked eggs yolks very slowly to bring the temperature of the yolks up.

I like to add ginger juice to the lemon pie filling for a little twist, but this (and the crystallized ginger for garnishing) is entirely optional. 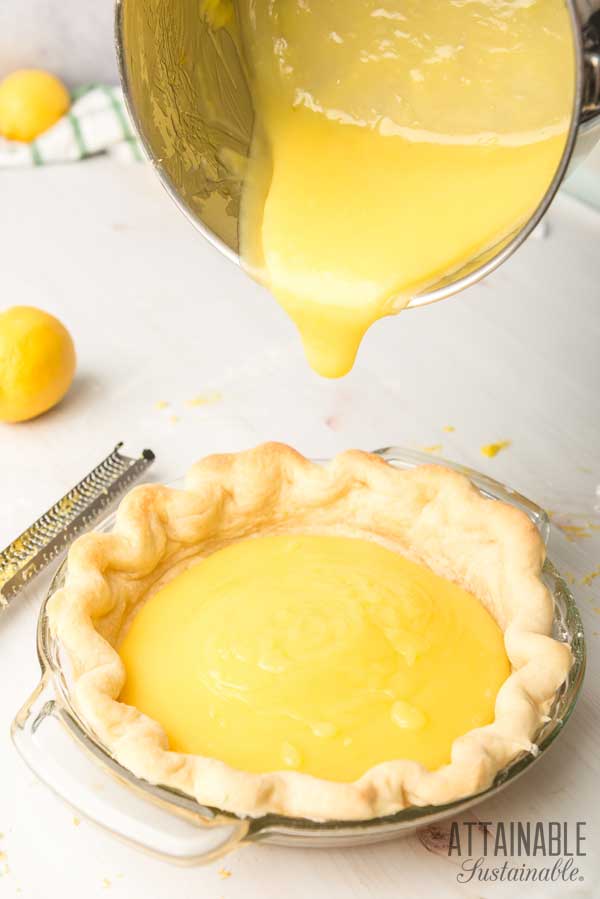 Making the meringue recipe for pie

The meringue on a lemon pie is a light and airy layer that is toasted under the broiler (or with a torch) to give it a pretty, browned surface. This can be the most fiddly part of making a lemon meringue pie. For the best results start with the freshest eggs possible.

To make a meringue, you’ll whisk egg whites until they’re frothy and then add cream of tartar and sugar. The cream of tartar helps to stabilize the eggs whites so you can achieve high peaks with the meringue. Adding sugar in small increments allows the egg whites to absorb it completely. Once the meringue is complete, transfer it to the top of the lemon pie filling and spread it out, making sure that the entire surface of the filling is covered, all the way to the crust. This helps to prevent weeping.

Use a fork or spatula to create swirls and peaks in the meringue, then toast the meringue under a hot broiler. This takes only a minute or two. Maybe three. Do not walk away or you’ll end up with a burned meringue!

★ Did you make this lemon meringue pie recipe? Don’t forget to give it a star rating below! ★ 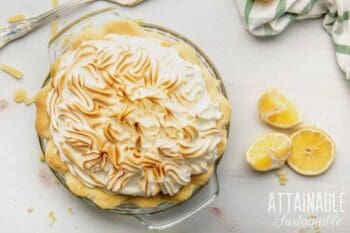 This homemade lemon meringue pie recipe might just be the perfect dessert. With a sweet & tangy filling, a flaky pie crust, and a fluffy meringue, it's no wonder lemon pie is such a  favorite!

Note: To make ginger juice, finely grate ginger and transfer to a small sieve. Press the ginger firmly, capturing the juice in a small container.

Fermented Foods: 50+ Recipes to Get You Started
Next Post: 12+ of the Fastest Growing Crops for Your Vegetable Garden