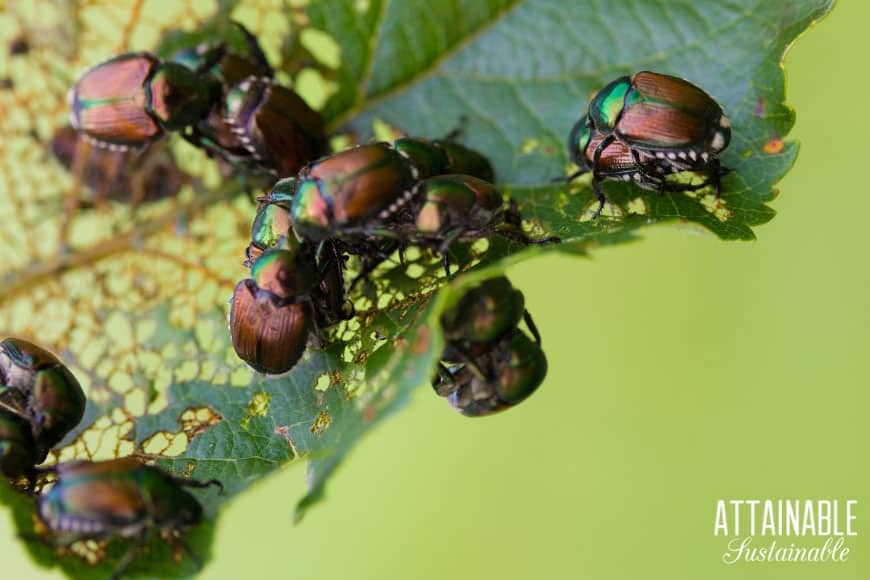 You may have heard me mention that we’re experimenting with some low-chill apple trees in our new location. Turns out, something else was excited about us planting apples here, too.

Within a couple of weeks of planting, the leaves on our trees looked more like lace than leaves. Japanese beetles feed on trees and shrubs, turning their leaves into lacy skeletons. They’re incredibly fond of my apple trees (they like crabapples, too) and have done a number on a new plum tree and my strawberry plants as well.

I’ve been carefully observing and have found a couple of weevil-like bugs and another that looked like a Japanese beetle. I’ve experienced a Japanese beetle infestation in another garden, so I recognized these guys — kind of.

I tried a couple of natural sprays. I tried a sticky barrier. But nothing seemed to work. And while I avoid toxic chemicals in my own yard, it’s worth noting that chemical controls have been found fairly ineffective.

I searched the internet for how to kill Japanese beetles (naturally) with little luck. I finally remembered to ask the grower who sold me the apple trees. He just nodded. Yep. Those bugs are a problem. But here’s where he pointed me in the right direction. 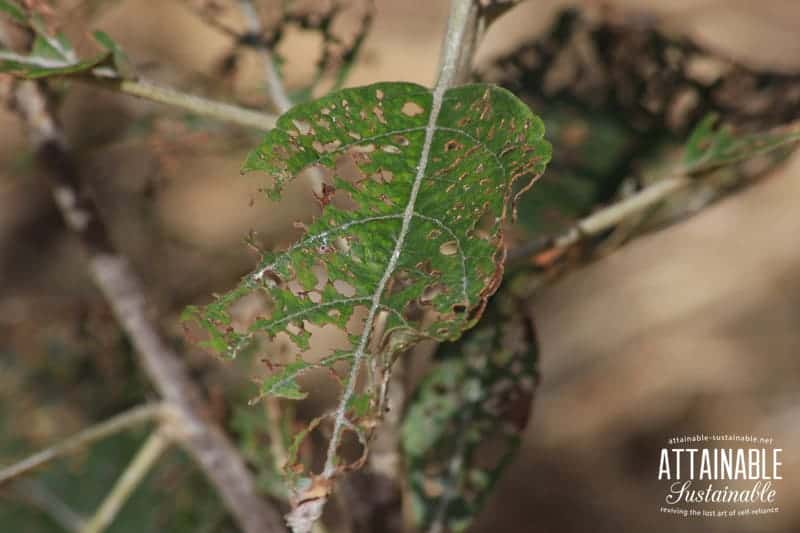 My beetles are nocturnal feeders.

Which means that the few beetles I’d spotted during the day were an anomaly. And it turns out, they’re not Japanese beetles, but rather Chinese rose beetles. Good thing I am a highly experienced nighttime pest hunter!

Understanding the life cycle of these beetles

There are three stages to these beetles’ life: egg, grub, and adult. Female beetles lay eggs in turf grasses, near the soil. Those eggs hatch into white grubs in July; they’re close to full grown — about an inch long — by August. They burrow into the soil where grubs feed on grass and plant roots. (Dead patches in your lawn may be a sign of grub activity.) They burrow deeply to survive the cold winter months. In June, the grub turns into a pupa, emerging in late June and July as an adult, to mate and lay eggs, starting the entire cycle over again. (Note that the timing of this cycle may fluctuate some, depending on where you are in the United States.)

Whether Japanese beetle infestation or Chinese rose beetle, the technique is the same. Fill a jar or bucket with soapy water an inch or so deep, and head out to your garden or orchard. Look for beetles on the top and underside of leaves. Quickly handpick the beetles and drop them into the soapy water.

My first night of beetle control netted 20-30 beetles, including numerous mating pairs who were interrupted in their procreation. I’ll continue doing this until I see a marked decrease in beetles, though my friendly farmer tells me that the worst of the damage is probably nearing an end — the beetles cause extensive damage like this for just a couple of months during mating season. 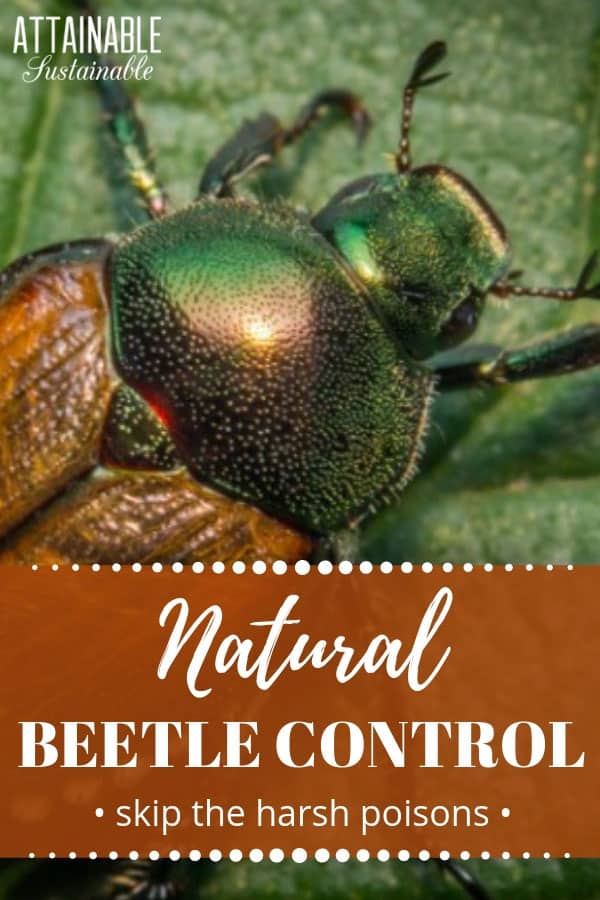 And here’s another trick, thanks to one of my readers. He suggested using milky spore powder. I’d never heard of it, but he said it had really worked well for him. Coincidentally, I was visiting with a friend of mine a couple of months later and out of the blue he suggested the milky spore powder for Japanese beetle control.

Milky spore is a natural, microscopic bacteria that kills beetles in their grub stage — when they’re underground. It is not harmful to people or pets.  You simply apply it to the soil (it doesn’t take much) around infested areas, water it in, and let it get to work. According to the milky spore product literature, it takes three years to reach peak effectiveness. The time is now, my friends.

UPDATE: I’ve been using milky spore for almost three seasons now and I do feel like the infestation of beetles is less devastating after applying the milky spore powder. I didn’t do nearly as much handpicking, either.

Hopefully the milky spore powder will continue to work its magic in the soil and wipe out most of the beetle population, eliminating damage from Chinese rose beetle or Japanese beetle infestation.

This post was originally published in October, 2014; it has been updated.

Next: Natural Weed Killers – 11 Ways to Kill Weeds Without Poison