Growing Grains in a Small Garden

While most gardeners are adept at growing vegetables, the idea of planting grain in the home garden isn’t one that many consider. Read on to learn more about growing amaranth plants, sorghum, and buckwheat in your garden.

Even if you don’t plan to process and eat the grains yourself, they’re a great addition to a chicken garden to reduce feed costs!

Ever thought of growing your own grain in your garden, but don’t have an extra half an acre to spare? Don’t fret. I don’t have that additional half acre either but I manage to grow small amounts of grain in my small garden. Since my household is gluten-free, I only grow quasi-grains such as amaranth, buckwheat, sorghum, quinoa, and oats.

I am still learning about growing quinoa and oats, so I will stick to the grains that I have grown successfully–buckwheat, the amaranth plant, and sorghum.

I adore growing buckwheat. I use it as one of my flours in gluten free baking. I even make a mean buckwheat pancake!

Compared to the other grains I grow, buckwheat is one of the lowest growing grain plants you can grow. It reaches about two feet tall and can be inter-planted with other plants.

Kris extols the benefits of growing buckwheat among your other plants. She explains that pests can’t maneuver around buckwheat’s growth to find your kale and cabbage. (I should take her advice since the moths love my kale.)

So, how do you grow buckwheat?

First, decide where you wish to plant the seeds. I have grown them in both an in-ground plot and a raised bed. I prefer planting in a plot; the bed can get very weedy, but the plants seem to be stronger and stand up taller. The drawback to this method is that the germination rate isn’t quite as solid as the raised bed method. In in a raised bed, use a mix that is 1/2 top soil and 1/2 compost. The plant stems seem to just fall over if there’s too much compost.

Broadcast the seed in your designated area, sprinkle compost over the seeds, and keep watering until seedlings emerge. Be careful not to sprinkle too many or you will crowd the plants, causing them to spindly and produce poorly. (I know from experience.) Buckwheat seeds germinate relatively quickly.

Buckwheat is a cool weather plant. I seed my beds at the end of June for a fall harvest since I live in zone 6. Plan to plant buckwheat three months before your first killing frost.

Harvest when about 75% of the seeds are dark. Wait longer and many will have fallen to the ground. To use in baking, I mill the seeds and sift the hulls from the mixture. Even if you don’t want to grow it for the seeds, buckwheat makes an excellent green manure and the bees adore it. 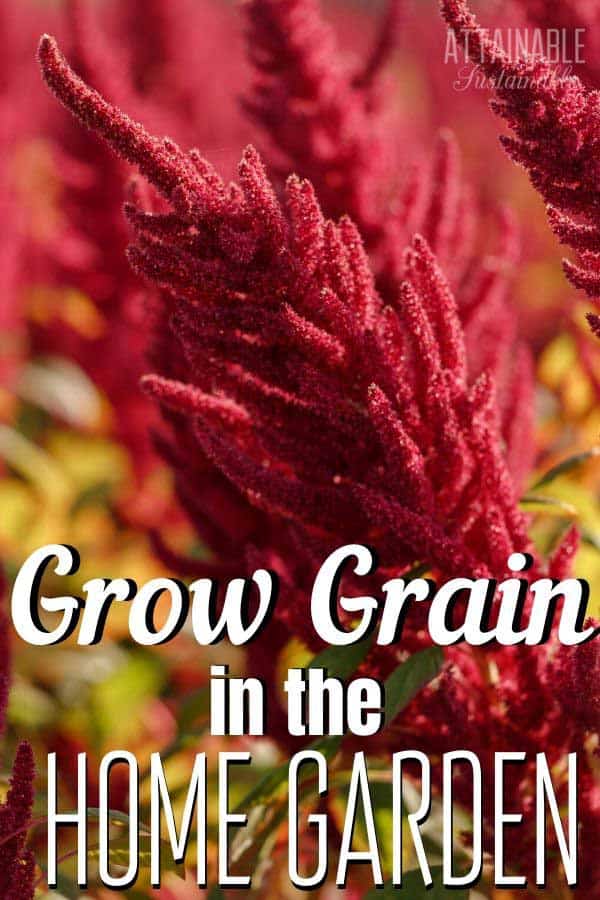 The Aztec called amaranth the food of the gods. The tiny seeds that grow on the amaranth plant are high in protein: a cup of cooked amaranth has nine grams of protein.

Many people use amaranth in their cereals or add a portion to other grains when baking bread, but the leaves are edible, too. Young leaves taste like earthy spinach. Of course, some people like growing amaranth simply for its show-stopping flowers.

When growing the amaranth plant, bear in mind that it can become invasive. Its tiny seeds will travel far and wide in your garden. The red seedlings reappear somewhere in my garden every year. I simply replant them.

I start amaranth seeds in the house and plant them out after my last frost date. Space them a foot apart to allow them room to grow. I prefer growing amaranth in a raised bed; however, at the end of their life, they will need to be staked. Their seed heads are dense and heavy.

I harvest my amaranth right before a frost. To test, rub a portion of the flower and see if the seeds fall into your hands. If they do, it is time to harvest; otherwise most of the seeds will find their way to other parts of your garden. 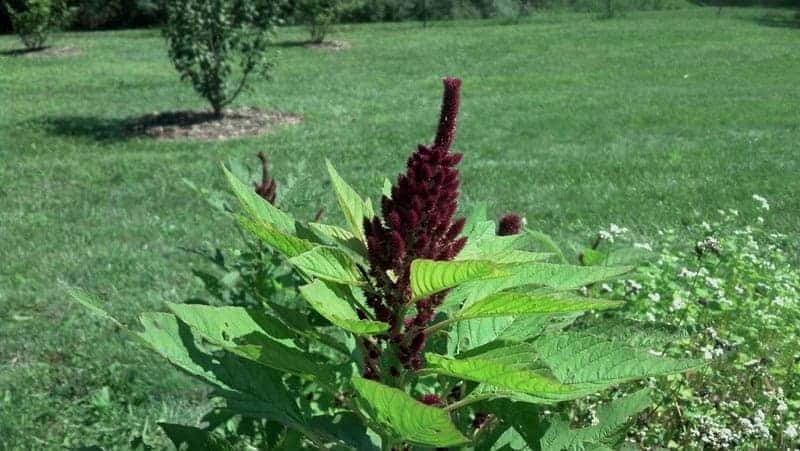 To harvest, cut the thick stalks of the amaranth plant down. To remove the seeds from the flower head, you will need a window screen and a large container. Place the screen on top of the container, don some gloves, and rub the flower heads against the screen. The small seeds will make their way through the screen and into the container. (A word of caution–deseed the plants where reseeding won’t be an issue. I made the mistake of deseeding them in my garage, and I had amaranth growing in all the cracks in my driveway the next season.)

Winnow the grain to remove the errant flowers that fall into the bucket.

To do this, some people use a fan on a low speed to separate the chaff from the seed. I simply wait until it is windy out and throw the grain in my bucket up in the air. The wind takes the light flowers leaving the seeds behind.

To learn more about growing amaranth, as well as harvesting and cooking it, read here and here. 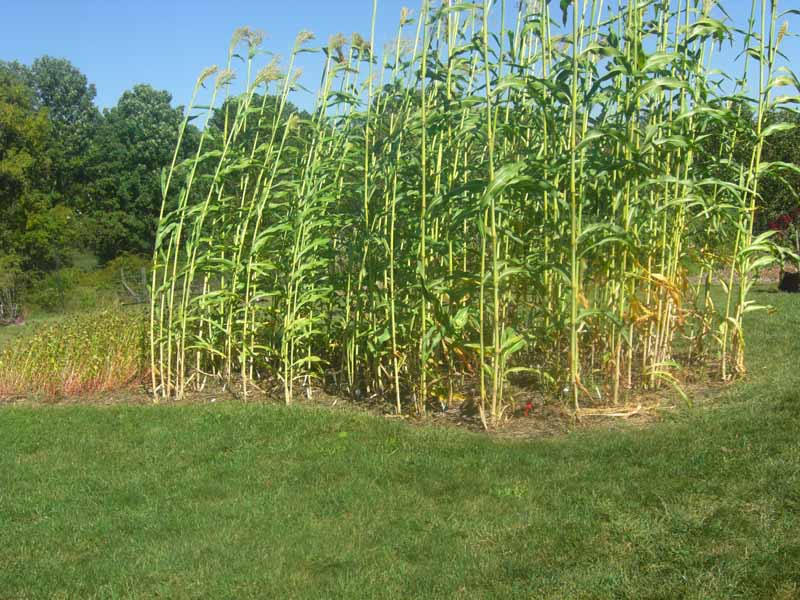 Sorghum grows similar to corn. In fact, many people mistake it for corn in my garden. It can grow to eight feet tall with a beautiful beaded head. In the south, sorghum is grown to make syrup. I would try that, too, if I could find someone to crush the stalks for me. I grow it for the seeds, which I use for baking. 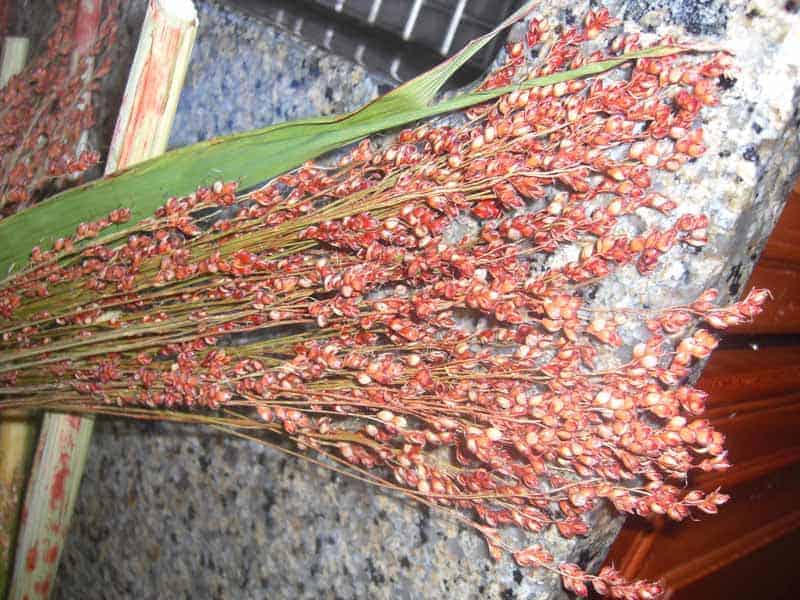 To grow grain sorghum, plant as you would plant corn after your region’s last frost. Sorghum seeds are much smaller than corn; I plant each seed about 12 inches apart. I prefer to plant them in a plot rather than a raised bed. These plants grow very tall and need a solid base. If you plant them in a raised bed, be prepared to stake them.

I harvest the plants when the seeds turn a dark color, which is usually near our first frost date. Sorghum matures in 90 to 120 days. To harvest, cut the stalks down and remove the heads.

Set a piece of hardware cloth (purchase at your local hardware store) on top of a collection container. Wearing gloves, rub the seed head against the metal and the seed heads will fall into the container below. You may need to winnow the grains as well. Similar to buckwheat, you can mill the grains, and sift the shells.

Although I don’t grow enough grain to last the entire winter, it is still fun to grow a portion of what we need. When a recipe calls for one of my grains, I beam with pride since I know I grew it.

Have you tried growing amaranth or other grains in your garden? If so, what are your tips for a successful harvest?

Anna Hackman is the editor of Green Talk, a green living and gardening blog, co-founder of the Green Sisterhood, a green women influencer network. She is also the proud owner of Anna Lee Herbs, where she sells her herbs that she grows and harvest from her garden. Originally published 2015; this post has been updated.