Growing Buckwheat: 9 Reasons You Need it in Your Garden

Planting buckwheat has been surprisingly good at creating lots of unexpected benefits in my vegetable garden. PLUS, growing buckwheat plants is super easy.

Be sure to check out this handy guide on watering vegetables the right way. 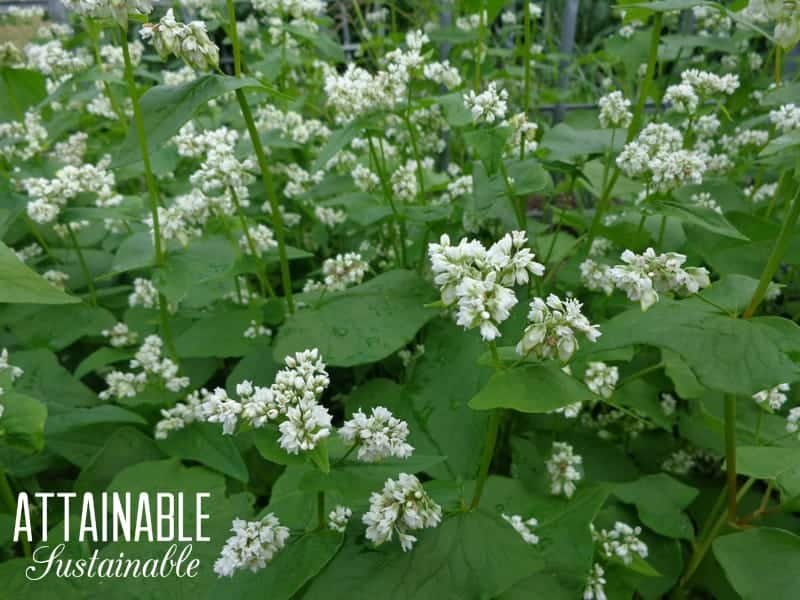 When a farmer I know mentioned a couple of years ago that he uses buckwheat plants alongside his crops, I was intrigued. I peppered him with lots of questions. I’d never heard of this tactic, one he claimed would help deter pests.

So of course, I decided I had to grow buckwheat. Let me tell you: It’s been awhile since I’ve tried something completely new and had it work so well.

What is buckwheat, anyway?

It’s not considered a grain — grains come from grasses. Sometimes it’s called a pseudo-cereal. Poor buckwheat has a bit of an identity crisis. It’s a starchy seed harvested from a flowering plant. Buckwheat is not a low-carb option, even though it’s technically grain-free.

Yes. Buckwheat is naturally gluten free, despite the fact that it has ‘wheat’ in its name. Buckwheat and wheat are from two different botanical families. Believe it or not, buckwheat is related to rhubarb!

When to plant buckwheat

Buckwheat prefers moderate temperatures and does well in 70-degree weather. When to plant buckwheat in your garden will depend a bit on your local conditions. Planting buckwheat in the spring and fall will provide the conditions it likes, as well as providing some benefits for your newly planted seedlings.

We don’t have hot, harsh summers like many gardeners do, so I’ve had luck starting it any time between March and November.

If, like me, you want buckwheat to grow between your garden veggies to help deter pests and hold down weeds (see below) allow the veggie seedlings to get a couple of inches high before scattering the buckwheat seeds. 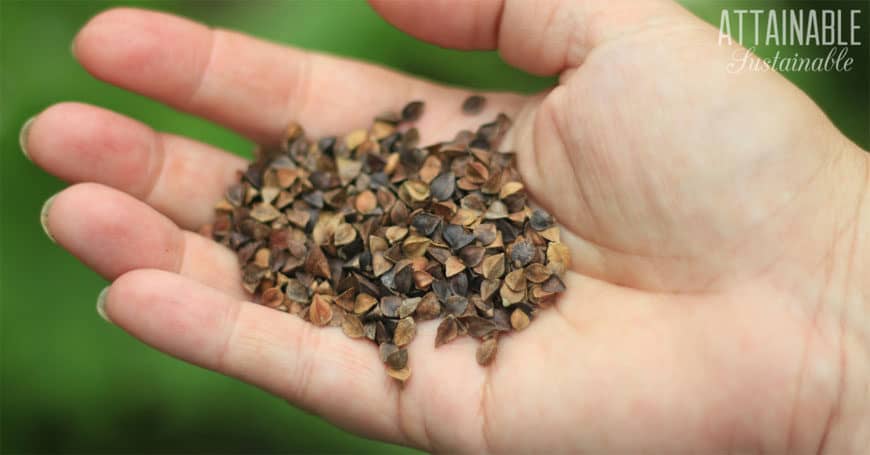 How to plant buckwheat seeds

Buckwheat seeds are dark brown, kind of triangular seeds, about an 1/8′ across. I purchase mine at the health food store in their bulk section.

You don’t need to manually plant buckwheat seeds in rows or holes or whatnot. I simply scatter buckwheat over a raked, weed-free bed; it won’t outcompete aggressive weeds. Maintain steady moisture, watering a couple of times a day if necessary to keep the seeds damp.

Germination will happen in the first week, with round leaves emerging from the soil. Note that buckwheat seeds can be grown and harvested as microgreens, too!

Buckwheat cycles through its growth process quickly, going from seed to flower in six weeks, ending its life cycle by producing more seeds in just 13 weeks. 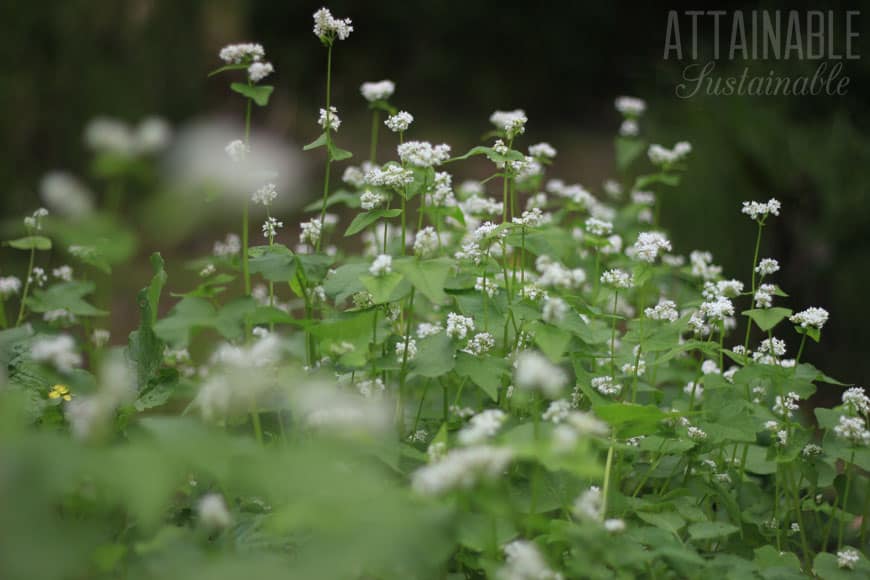 9 Good reasons to plant buckwheat in your garden

Now that you know more about buckwheat, here are nine good reasons planting buckwheat in your garden makes good sense!

Scattered alongside newly sprouted vegetable seeds or starts, the buckwheat seeds quickly take root, reaching its 12-15″ height in just a couple of weeks.

Flying pests find it difficult to maneuver through the lush growth of the buckwheat plants to reach their intended target. What this has meant in my garden is that cabbage moths can’t lay eggs on my kale plants (image below), giving them a chance to really get established before they outgrow the buckwheat. I’m hoping that similar holds true as my summer squash starts to bloom.

If I can prevent the night-flying moths that produce pickleworms from reaching the flowers, I might just have a shot at growing cucumbers and melons, too. 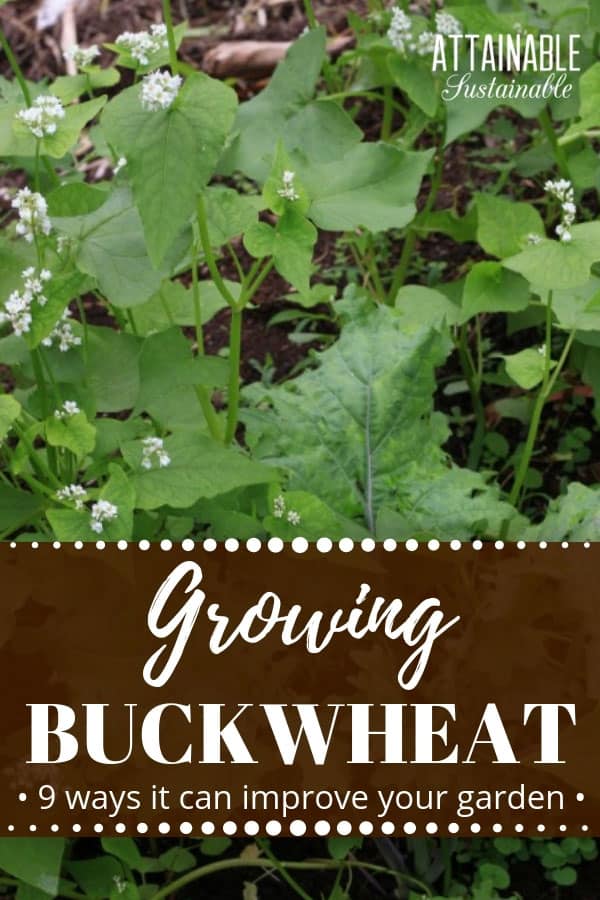 Honeybees have become a rare enough site that spotting one calls for excitement.

Since my buckwheat started blooming, honeybees appear in multiples alongside hover flies and other pollinators. And while they’re here enjoying the plentiful flowers, you know they’re helping to pollinate my veggies, too.

If it looks like some of my plants are too shaded by the 12″ tall plants, I clip some to allow a bit more sunlight in. Those clippings go straight to the chickens — they love the greens!

In and of itself, it can be a crop for gardeners who have the patience to process it. Ripe buckwheat seeds easily fall off the plant. Once the chaff is removed, use a grain mill to turn the seeds into flour. If you don’t want to mill the buckwheat into flour, you can grow buckwheat microgreens. 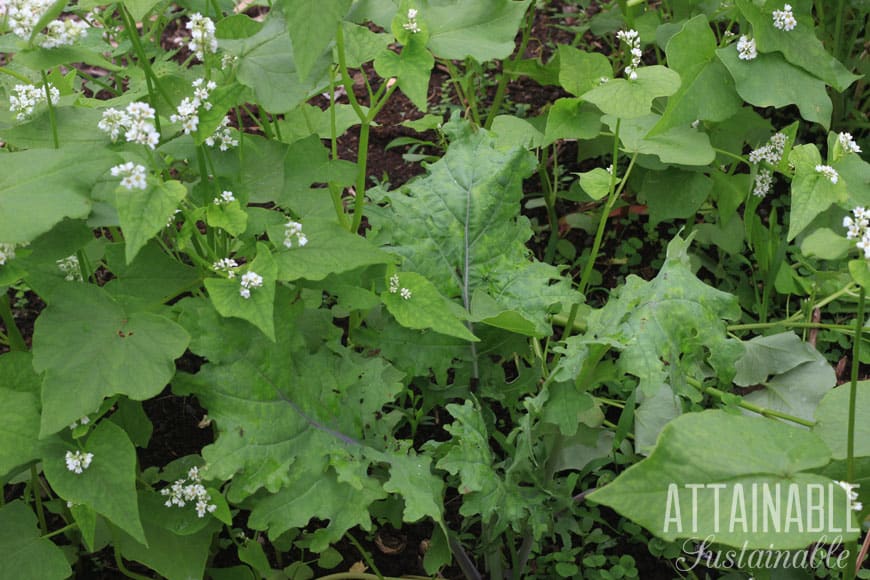 If you’re organized about it, you can collect the seeds to control where it pops up next. If you’re a little more casual about things, like I am, you can let Mother Nature do her thing and just let the seeds fall.

To get started, you can buy basic cover crop seed or—if you’re planning to harvest a crop—choose an heirloom variety of buckwheat seeds for better taste.

If you want to juice up your soil a bit, scatter seeds on a fallow garden bed or planting area. When it’s about a foot high, use the “chop and drop” method or till it in. 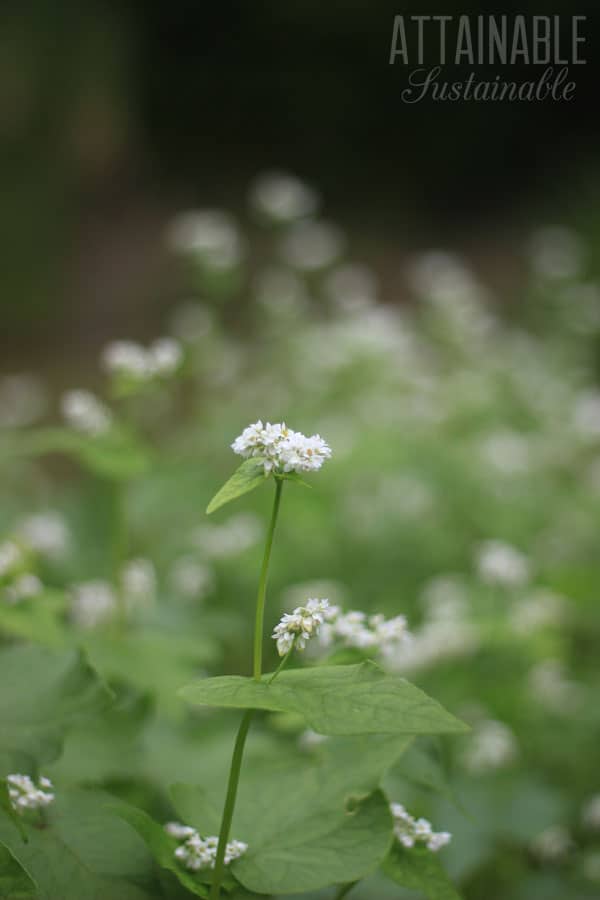 It grows so quickly that the plants shade out many weeds before they have a chance to take hold. Growing buckwheat plants helps with weed control!

You can dry the seeds you harvest and use them as filling for a traditional Japanese pillow, an aromatherapy eye pillow, or a homemade heating pad.

Even if it didn’t deter pests or help build soil or feed my chickens, I’d plant it. The soft green is a beautiful way to fill in bare areas. 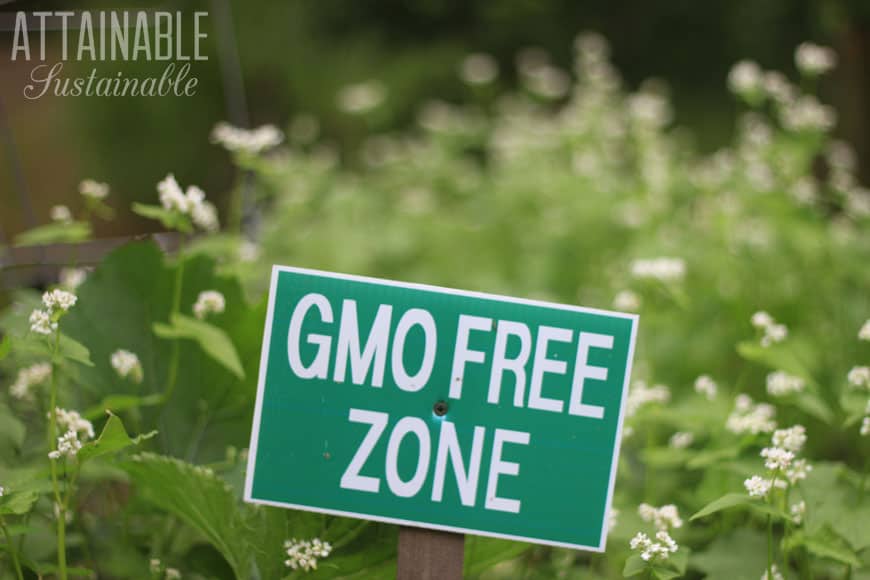 Previous: How One Family Built Their Off-Grid Homestead Debt-Free And on a Budget

Next: Easy Blueberry Jam – Make it on the Stove Top or in Your Instant Pot