You are here: Home / FARM / Butchering Chickens: Tips from the Trenches

We’ve culled our flock a number of times now, and butchering our own chickens has gone from “oh my goodness, can we do this??” to just another chore in our efforts to eat better food. Of course butchering chickens is never an easy chore, but we do our best to tackle it in a respectful manner, dispatching each bird with care as quickly as possible.

Processing chickens from my own personal experience:

Butchering chickens: Tips from the trenches

Awhile back, I asked for some advice over on the Attainable Sustainable Facebook page from those who’ve butchered their own chickens. There were so many good tips about processing chickens, it seemed selfish to keep them to myself. So here, in no particular order, are some thoughts from folks who have successfully processed their own chickens. If even one of these offers an “aha!” moment for you, maybe it will make processing chickens a bit easier for you.

Tony: When butchering chickens, I tie a small rope to each of the chicken’s feet and hang it upside down. It calms down immediately. Then I use a sharp knife to make one deep slit across the side of the neck. The blood drains quickly. I heat a pot of water to around 160-170 degrees. If it’s too hot, the skin will tear. I dunk the whole chicken in the hot water for about 30 seconds. After that, the feathers will slide right off and won’t have to be ripped out. Use a fork to get the lungs out. They are the hardest part of the chicken to remove.

Amanda: We skin the chickens rather than pluck, much faster. Have a good system in place before you start & do a dry run first. You’ll usually see what you forgot!

Sandy: I like to wrap mine tightly in a towel and hold them until they are really calm. I think it is an incredibly important thing to do yourself. It gives you a real connection to your food and the sacrifice the animal is giving.

Tom: I use the cone and do it fast with a sharp knife, humanely and with reverence and respect.

Carolyn: If you don’t want to spend money on a metal cone, I’ve seen some use an old [modified] milk jug. Cone will hold them tight and secure tho and keep them calmer.

Bess: When processing chickens, don’t apologize to the bird; thank them instead. 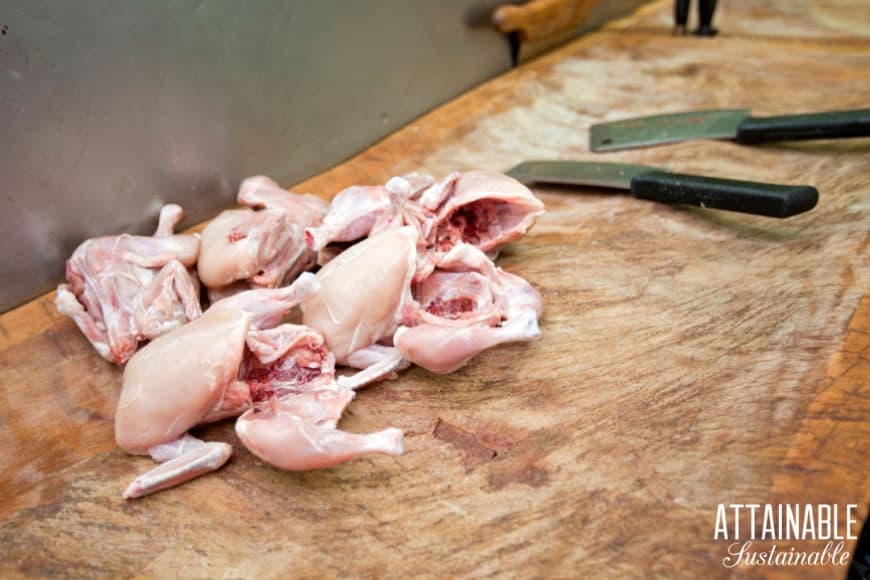 Meredith: I think most importantly, don’t stress and don’t panic when butchering chickens. It’s important to stay calm to do the job correctly and to keep the chicken calm before the deed is done. Be grateful and respectful; this animal is giving its life so that you can eat, end that life in the most respectful way possible. We always hold the bird until they’re calm and say thank you for your food. Know that you gave the animal the best life and death possible, and most of the chickens at the grocery store haven’t had it so good. Logistically, watch all the youtube videos on it that you can before you start, they’ll make you more comfortable and knowledgeable. If at all possible, find someone who knows what they’re doing and can show you the ropes of processing chickens. Have everything you need set up before you even bring the bird over, including pre-heated water for scalding. We always do it outside, it’s a smelly process. We use a cone and a sharp knife, being upside down calms the bird and this way cuts off blood supply to the brain immediately, making it a quick and less traumatic death. It’s not easy to end a life, and it shouldn’t be, but it’s necessary if you want to eat meat and want to be sure it was raised in the best way possible.

Lori: Have everything ready outside. The first one is the hardest. We said we would not do it again. That was six months ago. We are now looking for the best meat hens to raise. Can’t stand store bought chicken now.

Heather: When there is fear involved in the death of an animal, one can taste the adrenalin in the meat so keep your butchering away from the live animals.

Sarah: I’m a [vegetarian] so could never do this, but just a sensible word of advice – don’t ever bury dead chickens on your property. You’ll invite predators. If you are not going to eat them or feed them to your animals, take them to the edge of your village for disposal.

Sue: I mainly raise ducks and the plucking is easier if you put a splash of dish washing liquid in the hot water before dunking the birds.

Marion: 140 degree water is better than hotter, it gets the feathers off, but doesn’t cook the skin. Easier on us too. Have large coolers with running water to cool them off immediately after gutting.

John: My family had a chicken farm, so we butchered chickens – lots of chickens. The best and most humane way we found: Once you grab them, turn them upside down. Not only do they calm down, but they get faint after awhile. Tie the feet together, and hang them from a post. Since they are groggy at this point, the killing is not too traumatic for them (or you) — slit their throat, making the cut up and down, not across the throat.

Dawn: Make sure your hatchet is sharp and your cone is secure. Double check your area and tools before you start.

Rebecca: It does take a while to get used to it, and good at it.

Related: Chicken Supplies I Always Keep in the Coop 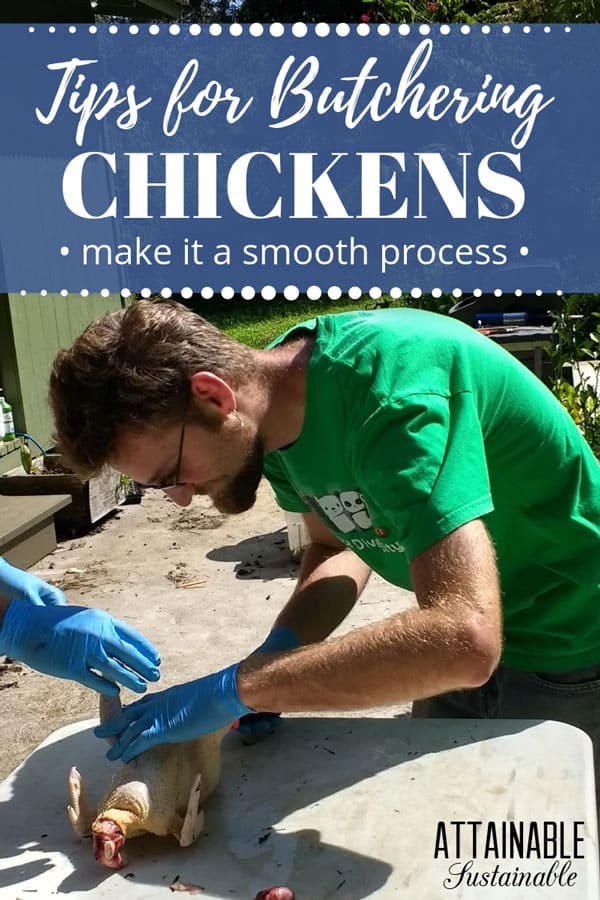 Joshua: Boil the water for plucking beforehand and don’t kill too many at once. You don’t want it too take more than hour before the first bird hits the ice. I just use a large pair of kitchen shears for the initial strike. I don’t pluck my birds, I just remove the skins, feathers and all.

Ann: We use the cone tool when butchering chickens and I have found that if you allow the chicken to be suspended head down for a few minutes before killing them they become much calmer and seem to be in a trance. I like to locate the butchering site far enough from the chicken housing so that the other chickens do not know what is going on.

Karen: It’s not as bad as you think it’s going to be! It tastes better and there’s peace of mind knowing what has gone into your food. Our first harvest of meat chickens last week went great, with a little help from our friends.

Penny: Go you your nearest feed supply store they may have a processing system you can rent for the day. We did close to 70 in four hours.

Anne: Make your first chop be your last.

Kate: I’m a vegan but I think its far more important for people to grow and slaughter their own meat than to buy it from someone who might. I have a lot of respect for people who are able to slaughter their own animals, but personally, I would never. I also think that a lot of people couldn’t do it, which points out part of how the factory farming system continues. Factory farming is pure evil and if stopping it means getting people to grow their own and do it themselves, I can support perpetuating that lifestyle.

Check out these posts from some of my blogging friends:

Real Vegetable Gardens from Far and Wide
Next Post: Joel Salatin Talks About Just DOING It